Kanye Drops $85,000 On Photo Of Whitney Houston's Drug-Strewn Bathroom To Use As Album Cover


Kanye West dropped $85,000 on a photo of Whitney Houston's drug-strewn bathroom to use as an album cover. In an interview this week rapper Pusha-T revealed Kanye- who co-produced his new Daytona album, decided to switch up the artwork, opting instead for the picture of the late singer's bathroom. '1 a.m., my phone rings, no caller-ID,' Pusha told Power 105.1 of the call he received from the 40-year-old Gold Digger rapper. '"Hey, yeah, I think that we should change the artwork. I like this other artwork."' he recalled Kanye saying. Pusha explained, 'Now this other artwork is 85 grand.

I said, "Hey, I don’t want to pay for that. And I wasn’t even going to ask you to pay for that. We picked what we picked. It’s here, it’s ready."' Kanye apparently replied 'No, this what people need to see to go with this music. I’ma pay for that.' according to Pusha. 'Ummm, it’s a picture,' Pusha explained.'It’s a picture. … It’s just a picture that to license it worldwide is 85 grand. I’m not really too, too, too entrenched in the art world like that. I’m just going to let him do that thing. And he’s paying for it.' The image Kanye bought the rights for, reportedly taken in 2006 inside Whitney's Atlanta mansion, shows a messy bathroom vanity with drug paraphernalia strewn around the sink. Whitney was found dead in the bathroom of her Beverly Hilton Hotel room in 2012 aged 48. 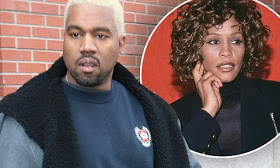