I Won't Abide By The Bible Rules Which Says Men Are The Head, Twitter User Promises 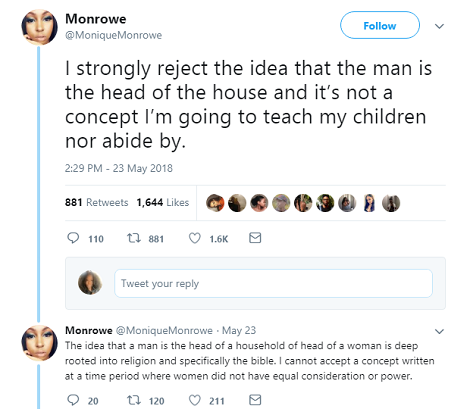 A female Twitter user, Monique Monrowe has said she won't obey the law of God which says men are the head. Monique says neither will she teach her children the doctrine as well. Lol, but the truth is, we all know when God speaks, that's final, no one can question is the authority. You can't. Even you that is trying to question His authority, He created you, without Him, you can't exist. So when the Supreme man says YES, you can't say no, Someone tells her, LMAO. Most people don't like the rules, especially no sex before marriage, no divorce and so on, but we can't change it, that's the REALITY.
Posted by Unknown on June 04, 2018