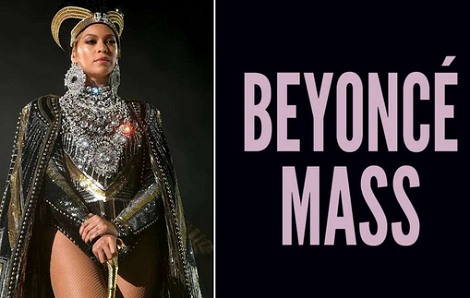 San Francisco's Grace Cathedral looked and sounded more like a concert than a church for a first-of-its-kind Beyonce Mass. It was amazing. It was one of the best spiritual experiences I've ever had," said San Francisco resident Stephany Ashley. People wrapped around the side of the cathedral an hour ahead of time to attend the blockbuster mass.

Normally, the Wednesday night vine service has 50 people in attendance but with Beyonce in the house, the service had 750 attendants. "We didn't expect this response," said Reverend Jude Harmon. He adds that Grace Cathedral put the invite to the service on Facebook and it blew up. "We thought it would be kind of a small exploration as a community about what it means to lift up black female voices because traditionally the church hasn't done a great job of that." "I use Beyonce as a central figure to have these conversations about the realities that black women face," said Reverand Yolanda Norton of the San Francisco Theological Seminary.

Norton is the brain behind the Beyonce Mass and gave the sermon Wednesday night. She is a professor at San Francisco Theological Seminary and teaches a class on Beyonce and the Hebrew Bible. She explains that she's using Beyonce's wide appeal to bring a diverse group of people together. "I know people think we're worshipping Beyonce. None of that is true," Norton said. "This is a way to just have different kinds of conversation," Norton said nothing is scheduled yet but this will not be the last Beyonce Mass.
Posted by Unknown on May 05, 2018