Melaye Thanks Constituents For Rejecting Recall 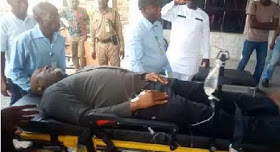 Hospitalised Dino Melaye has come on Twitter to thank his constituents for rejecting attempts to recall him from Senate. Melaye spoke from the National Hospital where he had been receiving treatment since Tuesday after he reportedly jumped out of a moving police vehicle and sustained injuries. “Thank you, my people. God bless you all. Thank you for the confidence reposed on me. I will not let you down. I will always stand by the truth and the people at all times. God bless Kogi West,” Mr. Melaye said on Twitter. “Every lie has an expiry date. Forces of evil will never triumph over forces of light. God is with us,” he added. Recall earlier this morning, the Independent National Electoral Commission (INEC) declared that the recall exercise they held on Saturday failed after people refused to come out to participate.
Posted by Unknown on May 05, 2018