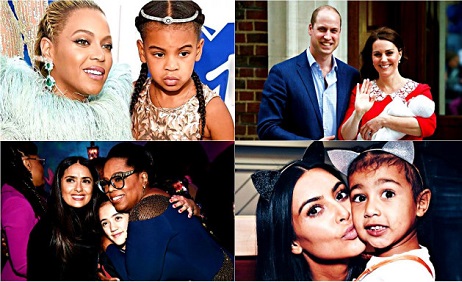 Imagine being able to sit back, do whatever you want and know that you'll never have to work a day in your life. It's the stuff of dreams for ordinary folk, but there are actually quite a few children out there who are living that reality.

The likes of Blue Ivy and True Thompson will probably never know the struggle of running low on toothpaste, and we're doubtful that they'd ever had to worry about paying their electricity bills.

Even the more stressful tasks like traveling would be made easy, with the option of a private jet trumping first-class on the likes of Ryan Air or Virgin Airlines. Check out how easy their lives might be... Blue Ivy, Rumi and Sir Carter Six-year-old Blue Ivy and her twin siblings, Rumi and Sir, probably know a thing or two about wealth, seeing as the combined net worth of their parents is currently over one billion dollars. Forbes put Jay-Z's net worth at $900 million – making him the richest man in hip-hop, and as for Beyonce, Celebrity Net Worth states that she could be worth up to $500 million currently.

Prince George, Princess Charlotte and their baby Louis Romper estimates that Prince George's net worth stands at £1.7 billion, as a result of something called 'The Prince George effect'. To put a little context on the term, in July 2016, the Prince wore a £9 Sunuva T-shirt for his third birthday photo-shoot, and this resulted in the design selling out in just an hour after the images were released. Hence, the Prince George effect. According to Elle, Princess Charlotte has an estimated net-worth of £3 billion due to a phenomenon similar to her old brother's, dubbed 'The Charlotte effect'. This came into play when, in 2016, childrenswear company My1styears.com saw a 97% increase in sales once images of Charlotte wearing their pink shoes on holiday surfaced online.

As for the new Prince, the director of the Centre for Retail Research has guessed that he could generate up to £80 million for the economy (but it would have been up to £150 million if he were a girl).

North, Saint and Chicago West The children of Kim Kardashian and Kanye West are certainly in for an easy life. Whilst Kim's net worth stands at $150 million, Kanye West – being a fashion designer, musician and more – comes in slightly higher at $160 million. Their three children will undoubtedly have a share in those funds when the time comes, but as of now, each of them already has $10 million to their name. According to Romper, Kim and Kanye set up a $10 million dollar trust fund for North before she was even born, accessible in full when she turns 21-years-old in 2033. Assuming that they've done the same for Saint and Chicago, all three of the West Kids can certainly live their lives without ever having to work.

Valentina Paloma Pinault At just 10 years old, Valentina is already set for life. Being the daughter of Salma Hayek and corporate executive Francois-Henri Pinnault, it's no surprise that she's already been cushioned with a substantial amount. According to Bloomberg's Billionaire list, Francois-Henri currently has an estimated net worth of $28.9 billion, whilst Salma Hayek stands at $85 million. According to Alux, Valentina's net worth stands at $12 million, and that's reported because her parents decided to purchase a $12 million house in her name when she was younger. True Thompson

Khloe Kardashian's daughter may have come into this world in the wake of a thunderous cheating scandal, but her estimated net worth proves that it'll be nothing but smooth sailing from here on. Her father, 27-year-old NBA star Tristan Thompson, plays for the Cleveland Cavaliers, and reportedly earns $16.4 million a year. Not to be outdone, of course, Khloe Kardashian's estimated net worth currently stands at $40 million. Whilst the mere funds of her parents alone should ensure that True lives a comfortable life, hollywoodlife.com have reported that she could be in for more wealth with a trust fund being set up in her name. According to Hollywood Life, Kris Jenner ensured that Tristan placed $10 million in a trust fund for True – similar to the trust fund Kim and Kanye set up for North West. If this is the case, then True Thompson, like her cousin, is already worth $10 million.