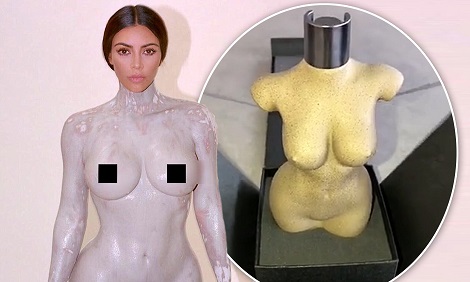 She's been teasing her fans for days with saucy snaps of her nude body. But Kim Kardashian finally released images of her new KKW Body fragrance bottle that was modeled after her own shapely figure on Wednesday. The 37-year-old beauty posted shots of the nude replica container on social media as she is embroiled in a fallout from her husband Kanye West's recent Twitter tirades. 'Alright guys I want to show you my bottle for KKW Body,' Kim began in the Snapchat video as the camera focuses on a black box. She then pulled the string off the box as the four sides fall down to reveal the marble-like bust featuring breasts, torso, and buttocks. 'So this is not the press box you guys, this is the regular box. I didn't do press boxes because I wanted everyone to get this amazing box. 'I thought this was such a cool box within itself that the bottle is on like a statue pedestal... like a statue... in a museum.'
Posted by Unknown on May 05, 2018