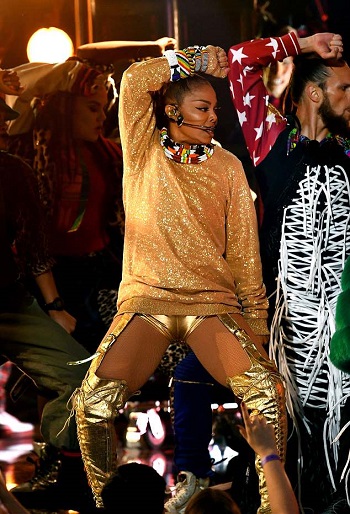 She has spent an incredible four decades in the public eye. Yet Janet Jackson proved she's still got what it takes, as she made a very sexy return to the spotlight at Sunday night's Billboard Awards in Las Vegas.

The 52-year-old gave a storming rendition of her 1986 mega-hit Nasty and 1994's club smash Throb, in her first televised performance in more than a decade. Dressed in a sparkling golden sweater, teamed with high heeled boots and suspenders, Janet's incredible post-baby figure (she welcomed son Eissa last year) was highlighted as she tore up the stage.

The fast-paced highly choreographed routine looked exhausting but proved no problem for the ever-youthful Janet. Her energy proved infectious, bringing the star-studded audience - who included her mother Katherine - to their feet.

They were still chanting her name as she stepped forward to accept the prestigious Icon Award in recognition of her long career. The first black woman ever to receive the Icon award, Janet explained that she saw a rosier future for those who had suffered discrimination.

Thanking her audience, Janet explained: 'I'm deeply humbled and grateful for this award. I believe that for all the challenges, for all our challenges we live in a glorious moment in history. 'It’s a moment when at long last woman have made it clear that we will no longer be controlled, manipulated, or abused. 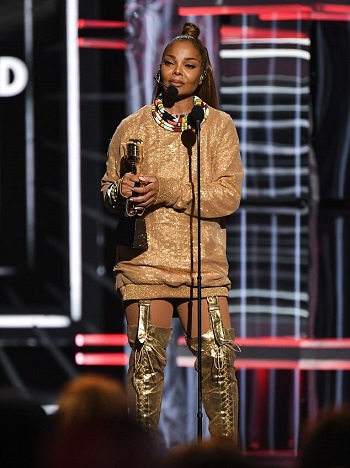