Banky W Recalls How He Almost Quit Music! Wants You To Stay Strong Too 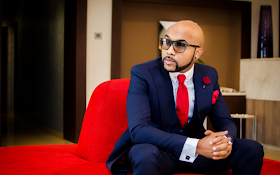 Banky W has dished out advise from his own experience. I know many think, Banky is from a well to do family, fortunate and just got on the music scene without any difficulty and made it. But today Banky is saying, no, you are wrong, I am just like you and above all, let us thank God for his mercies. Here's how Banky in a tell it all note revealed his grass to grace story. He might not even know, he has said it all, lol. This will really help a lot of people... READ. Speaking on a radio programme the singer explained; “All the money that I had saved for my music, I had spent on marketing, videos and other things.

On the last day of December 2008, I realised that these things were not working out well for me because I had high hopes when I was returning to Nigeria from America. I believed that I would be the greatest artiste in the world till reality set in. I went to church for new year service as I always do and I prayed to God telling him that things were not working out fine for me. I even wrote down my prayer point, telling God what I wanted. As I left the church, I got accosted by armed robbers at about past 1 am and that was the worst 45 minutes of my life. They drove around and demanded that I withdraw money from my account for them.

At that point, I was already broke, depressed, frustrated and tired. I was already regretting the fact that I came to Nigeria because when my parents knew about my decision, they were worried, especially my mother. They all told me that it would not work and then I got robbed. After I got robbed, a few days later, the caretaker of my house got drunk, took my car and drove it into a neighbour’s wall on the same estate. That was my only means of transportation and it was gone.

This was a car that was always breaking down all over Lagos. I had already started releasing music and fame came before fortune. Sadly, anytime someone sees you on television, they assume that you have money. At the time, I would borrow N5,000 from Segun Demuren every Monday to fuel my car and buy airtime for my phone. Luckily for me, I had somewhere to lay my head and there was food on the table. But that is how bad things were for me.

When I got robbed and my car was later damaged, I did not know how to get around. “At that time, I sat in my room depressed and Segun came around and asked me for my next move. I told him that it would be nice to record a new album but that I did not have the funds. He asked who I wanted to work with and I told him Cobhams. Back then, we were not friends and to be honest, getting Cobhams’ services is not cheap. We called his office and got the price. Segun actually went to borrow money and gave it to me. He said I should use a fraction of it to fix my car while I use the rest for my album. Then, I was very close to throwing in the towel and returning to America.

I thought of getting a job as well but we held on. I decided to start again but work differently. I changed my method and approach. I worked with Cobhams and the first song we did was ‘Strong Thing.’ That was the song that changed the game for me,” he said. The singer used his life story to advise those going through a rough time, reminding them that things would get better. “I am saying all this because sometimes when you have hit rock bottom and it feels like everything you have tried is not working; the good news is that the only place to go is up. It is in that moment you need to hold on a little bit longer. You tell yourself that things are bad but I did not die and since you have breath in your lungs, you have the chance to turn things around because tomorrow is a new day. Crying over your past is not going to do anything for you,” Banky W said.
Posted by Unknown on May 05, 2018