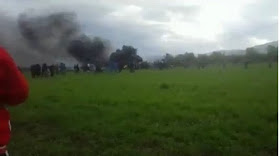 Hundreds are feared dead after a military plane crashed in Algeria soon after taking off from an airbase near the capital Algiers. Some 200 people were on board, most of them military personnel, local news report, showed images of the burning wreckage. The plane reportedly went down near Boufarik airport in Blida Province, around 18 miles from the capital Algiers. The Algerie Presse service agency said the Iliouchine-type plane was headed for Bechar in south-western Algeria. Emergency services have been dispatched to the site of the crash, and no death toll was immediately available.
Posted by Unknown on April 14, 2018