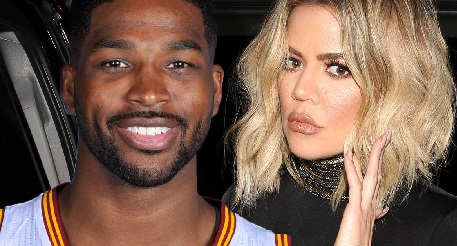 Tristan Thompson has reportedly splashed out a whopping £40,000 on a diamond gift in a bid to win Khloe Kardashian 's forgiveness. The birth of their daughter was announced last night, just one day after videos of him allegedly cheating with four other women emerged online.

And now it's said that he's bought her an expensive luxury gift in the hope of making amends. Tristan, 27, was by his 33-year-old girlfriend's side as she gave birth to his little girl. It's thought Khloe gave birth at 4am on Thursday morning with Tristan by her side after she decided to forgive him after several pictures and videos emerged suggesting he had kissed and potentially engaged in sexual relations with other women while she was days away from giving birth.

And according to reports, he had a stunning pink diamond necklace and matching bracelet made for Khloe, as well as mini versions for their little girl. A source close to the family told The Sun: "Tristan is so emotional right now. "He is going all out to prove to Khloe that he loves her and is going to be a great father to their daughter. "Tristan is already working on an incredible push present for Khloe." It's said that the jewelry has set him back £40,000 and that he's working with jeweler

to the stars Lorraine Schwartz to design the gifts. It comes as insiders claimed Khloe's sister Kim was left feeling "sick" as she stood by Tristan's side in the delivery suite. A source told The Sun: "Kim and Kourtney flew out as soon as Khloe went into labor – they’d never miss the birth of her first child. "But it was so hard with all the cheating allegations. Kim and Kourt aren’t known for holding back on their opinions, especially on someone who’s hurt their sister, but they were acting like nothing had happened. "They didn’t want to spoil the most magical day of her life, so nobody tried to bring up the cheating rumors."
Posted by Unknown on April 14, 2018