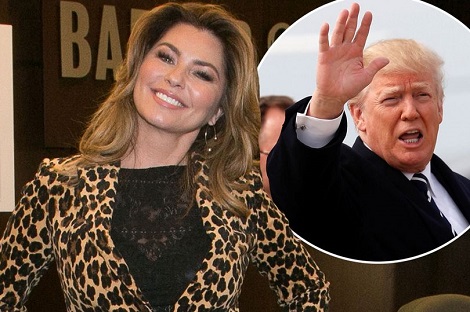 Shania Twain has taken to Twitter to say sorry for 'offending' anyone by admitting she would have voted for Donald Trump. The Canadian singer wasn't eligible to vote in the US presidential election, but said if she could have voted she would have chosen Trump because he "seemed honest". However, she soon faced a backlash on social media over her remarks that featured in The Guardian, and she attempted to defuse the criticism by issuing an apology. "I would like to apologize to anybody I have offended in a recent interview with The Guardian relating to the American President," Twain, 52, said on Sunday.

"I am passionately against discrimination of any kind and hope it's clear from the choices I have made, and the people I stand with, that I do not hold any common moral beliefs with the current President. "My answer was awkward, but certainly should not be taken as representative of my values nor does it mean I endorse him." Twain, known for singing That Doesn't Impress Me Much, said she was caught "off guard" by the question about Mr. Trump. In an article published on The Guardian website on Sunday, she said: "I would have voted for him because, even though he was offensive, he seemed honest.

Do you want straight or polite? Not that you shouldn't be able to have both. "If I were voting, I just don't want bullshit. I would have voted for a feeling that it was transparent. And politics has a reputation of not being that, right?" Fans criticised her for apparently backing Mr Trump, with many pointing to his alleged "bigotry" including his treatment of transgender troops and his brags of being able to grab women "by the pussy".
Posted by Unknown on April 23, 2018