Our Princess In A Bit, Meghan Markle Split From Previous Boyfriend Over A Pasta Dish... 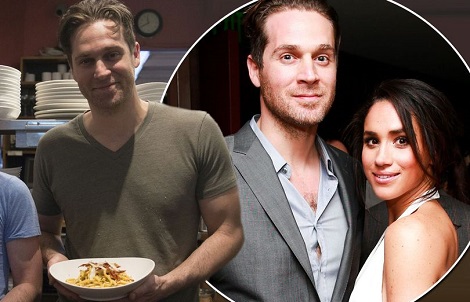 She is set to marry into the royal family, next month. But, shortly before she began dating Prince Harry, actress Meghan Markle lost another relationship - over a pasta dish. The brunette beauty, 36, was previously partnered with Canadian chef Cory Vitiello between 2014 and 2016.

However, a source told the Daily Mail that he eventually tired of her 'prima donna-like behavior', which involved trading on her TV fame. Specifically, it's claimed the Toronto-based restaurateur finally snapped when she took credit for one of his Italian recipes at a dinner party.

In fact, the intricate dish - pasta interwoven with courgette spirals - was his own gastronomic creation. Already annoyed by her limelight-stealing, it's claimed this was the straw which broke the proverbial camel's back and killed their connection
Posted by Unknown on April 14, 2018