Meet The 21-Year Old Kenyan Girl Who Is Dating 54-Year Old American! Says I Can't Live Without Him 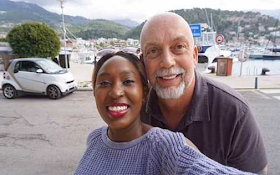 A Kenyan student in the United States is the subject of discussion after her relationship with her American boyfriend became a trending topic over their age-gap. Speaking to Mail Online, Rehab Kimani, 21, said she met Joe Singiser, 54, through work at a nursing home in New Jersey. A student and home health aide, Rehab said that her friends got disgusted by her choice of boyfriend. They even stopped her from talking about her man whenever she was around them “I thought he was very attractive and immediately wanted him,” she revealed.

“I really liked his big muscles and that everyone at work was afraid of him.” Rehab also reveals that despite being very comfortable on their first date, it was hard for her to deal with the way her family reacted as they did not take it positively. “I just see him as my boyfriend and my best friend. If anything, the difference is that I take this relationship as more serious than previous ones. It took everyone a long time, but they are finally understanding of us being together.” She said.
Mr Singiser is a father of four and Rehab’s supervisor at work. He says he was ‘startled’ when he got interested in his younger employee but opted to press on with the relationship because he knew it was true love. He says he noticed her beautiful smile from the across the room and would find excuses to come out of his office just to see her. Rehab says that she no longer sees the age difference. However, they do draw looks from strangers on the streets. “We get looks while in public all the time,” she said. “Someone even came up to me once and said I should be ashamed of myself because I just want his money. I did get sensitive, but I just walked away.” The couple, who have been together for a year now, lives together and are planning on starting a family together having started discussing the possibility of marriage and having children.
Posted by Unknown on April 23, 2018