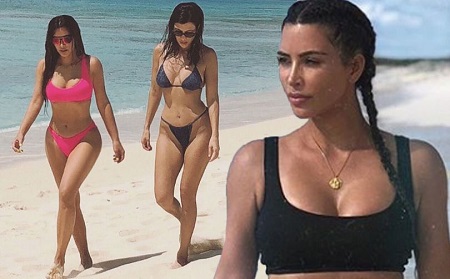 With more than 110 million followers, she's the ultimate Instagram star. So it's perhaps understandable that Kim Kardashian carefully curates what her audience is allowed to see. Hence why the 37-year-old recently deleted a slew of images from her Turks And Caicos holiday with sister Kourtney Kardashian this week.

Erasing several snaps - and their comments - from her page on Friday, she explained her motivation as wanting to improve the 'vibe'. She said: "I deleted some vacation pics because I didn’t like the vibe on my page but I re-filtered them and reposting some! I’m crazy about the vibe on my IG page. #PositiveVibesOnly." The post, which was accompanied by a sexy bikini picture, seemingly referenced comments fans had made about Khloe Kardashian's boyfriend, Tristan Thompson. Hours earlier, news broke that he'd allegedly cheated on his partner with up to five other women - while she was pregnant.

Thompson denied the claims, but Kim clearly didn't want any presence of the drama on her social media account. Especially as, just one day earlier, Khloe welcomed her baby girl at the Cleveland Clinic in Ohio.