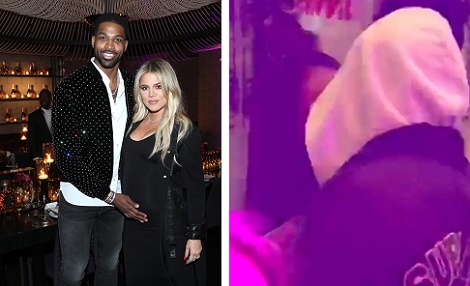 The video filmed by clubbers shows Tristan, who has been dating Khloe since 2016 and is expecting their first child together imminently, appearing to lean in to kiss the woman. The clubber who filmed the clips told the Mail: "I was there and he was on the table right next to us with a group of friends and some girl who he was obviously making out with all night. "They were holding each other and it was so obvious. They were there when I got there and they were part of a big group of friends. "Everybody knew who he was.

We talked about it and everybody watched them make out several times." According to the Mail, the pair can be seen "chatting intensely" and dancing at the PH-D bar before the woman closes her eyes as she leans in towards Tristan as it appears the couple lock lips. The NBA player, 27, was also spotted at his team hotel, the Four Seasons, with the petite brunette on Saturday night - both before and after they were filmed canoodling in public, according to Page Six. Witnesses said they spent around four hours at the five-star hotel before emerging together with Thompson sporting a different outfit. The pair were then photographed on their way to private members club Soho House before returning to his hotel at 5am, where witnesses said he was seen “looking around cautiously…and holding the door for her." At around 8pm the next day, the model was spotted leaving Thompson’s hotel in the exact same outfit clutching a stuffed Louis Vuitton overnight bag.
Posted by Unknown on April 14, 2018