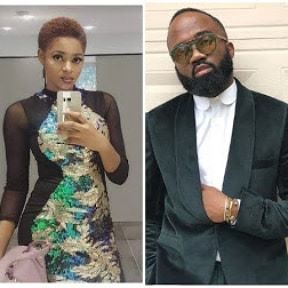 Noble Igwe lambasted Big Brother Naija reality star Ahneeka,of not taking proper care of her hygiene. After big brother evicted her, Ahneeka replied Mr Igwe.... In this chat with Sunday Scoop, Noble maintains his stand. He said, “I have said a lot of good things about her in the past.

There was a time I said she speaks good English. Why didn’t anybody raise eyebrows at that. I like it when things are balanced; they make a lot more sense that way. The truth is that everybody has an opinion about the housemates. It could be about their hygiene; the way they dress or any other thing. I don’t think anybody has an issue with people commenting on the show.


These guys are on national TV and we watch them all day; so, there’s nothing wrong about passing comments about whatever happened in the house. Whatever I said about BBN was strictly about what I saw the housemates do. On a particular day, there was a close-up shot of her underarm and the viewers saw that it was not well-shaven; I tweeted about it. On another day, the cameras showed this particular housemate peeling her face and I tweeted that it would be nice for this housemate to wash her face often and stop peeling it.

I speak about everything in the house so far it is caught on camera.” Responding to people who felt he should have reached out to Ahneeka privately, Igwe said, “How was I supposed to send her a direct message when we are not friends and I don’t even know her? I’m allowed to have an opinion, and that’s simply what I shared.” Ruling out any form of apology, he said, “You are supposed to apologise when you feel that you have done something wrong. You apologise when you feel it was a personal attack.

You cannot apologize for stating the fact that everybody can see. Criticising a person doesn’t mean that I don’t like him or her.” Debunking the reports that he is paid to stir up controversies about BBN on social media, Igwe retorted, “Apart from being a social media influencer, I am also a human being that has an opinion. When I got married
Posted by cocowondersblog.com on April 09, 2018