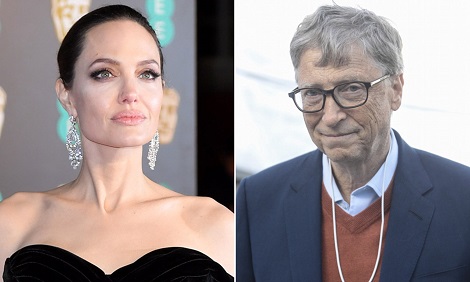 Bill Gates and Angelina Jolie have been named the most admired man and woman in the world. The tech mogul and the actress-turned-humanitarian have topped the list, compiled by YouGov - a market research company based in London - since separate male and female categories were introduced in 2015. Both beat out several influential leaders and personalities including both Barack and Michelle Obama, Oprah Winfrey and even the Dalai Llama.

The list features 20 men and 20 women whom were selected after 37,000 people were polled in 35 countries. Falling closely behind Gates for 'most admired man' are former US President Barack Obama, actor and martial artist Jackie Chan, President of China Xi Jingping and Chinese business magnate Jack Ma. Rounding out the top five for the women's category are former US first lady Michelle Obama, TV host Oprah Winfrey, Queen Elizabeth II and former US Secretary of State Hillary Clinton.
Posted by Unknown on April 14, 2018