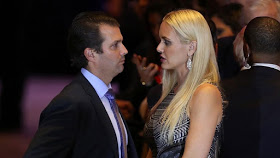 Vanessa Trump married Trump Jr. in 2005 and have five children. The reasons for the divorce filed Thursday in Manhattan Supreme Court were not clear. The divorce was listed as “uncontested,” indicating the split was amicable. Trump Jr., 40, has been traveling extensively while running his father’s business with his brother, Eric.

President Trump has been divorced twice and is married to Melania Trump. Trump’s first wife, Ivana, is Trump Jr.’s mother. The Trumps issued a joint statement asking for privacy.

“After 12 years of marriage, we have decided to go our separate ways. We will always have tremendous respect for each other and our families. We have five beautiful children together and they remain our top priority. We ask for your privacy during this time,” the statement read.
Posted by Unknown on March 24, 2018