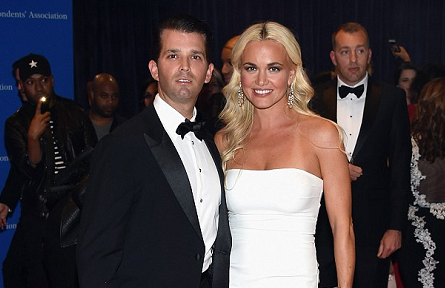 Donald Trump Jr's wife Vanessa Trump has been hospitalized. She was hospitalized this morning after opening a letter with a white powder inside.

The former model, 40, was at her parents' apartment in a building in Manhattan's Midtown East around 10am when she opened the letter addressed to her husband and started coughing and feeling nauseous, a source with direct knowledge of the incident told DailyMail.com

Trump's mother Bonnie Haydon handled the letter before passing it on to her daughter, according to the New York Post.

The mother and daughter and another person were decontaminated and taken to New York Presbyterian-Weill Cornell Medical Center as a precaution, New York City Fire Department officials said. They appear to be fine now. Law enforcement sources told the Post that the powder turned out to be cornstarch.
Posted by Unknown on February 13, 2018