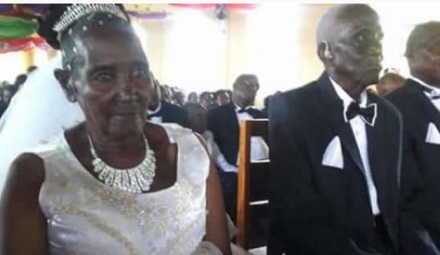 An 83-year-old virgin simply identified as Naom, has found love with a 90-year-old father of 10, known as Rwakaikara. They exchanged their vows at St. James Cathedral, Kigorobya, Hoima District of Uganda.

The officiating minister, Bishop Kyamanywa, told the congregation that it is never too late when one follows the leading of God. He also thanked the couple for waiting for their special day, UgandaBlizz reports.

said the couple have challenged the young generation to also follow the way of God, stating that so far in his pastoral work, he has never wed a couple of this age and that this has been a blessing to him.

“It’s my first time since I started work as Bishop to wed an old virgin woman as Naom. This is amazing and the world will read and learn a lot about you,” he said. Although Mr. Rwakaikara has 10 children and 40 grandchildren from his first (late) wife, his new wife Naom has never married before and doctors have confirmed she was still a first class virgin at 83 as of 24th December 2017. Until her marriage, Naom was world’s oldest female virgin and has been receiving a lot of money from well-wishers to support her.
Posted by Unknown on January 20, 2018