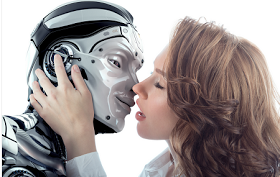 There’s been a lot of talk about sex dolls and women literally made of rubber and plastic, but men aren’t the only ones excited about the prospect of having sex with a robot. It turns out that sex doll companies like Real Doll are going to be making male sex dolls that have batteries in them and can actually be charged to go for as long as they’re needed for.

They’re even going to have verbal cues to respond to so the experience will feel that much more real for a woman.

However, making a male sex robot comes with a few more hurdles than making a female sex robot. In order to make a male doll that can outperform a sex toy, that male sex doll needs to be able to have some tricks up his sleeves that female robots don’t need and the company producing them says all that would be in place. They are set to hit the market this year.
Posted by Unknown on January 20, 2018