Prophet Lethebo Rabalago from the Mountzion General Assembly in Limpopo, South Africa, charged with assault after the congregants he sprayed with insecticide, took ill... 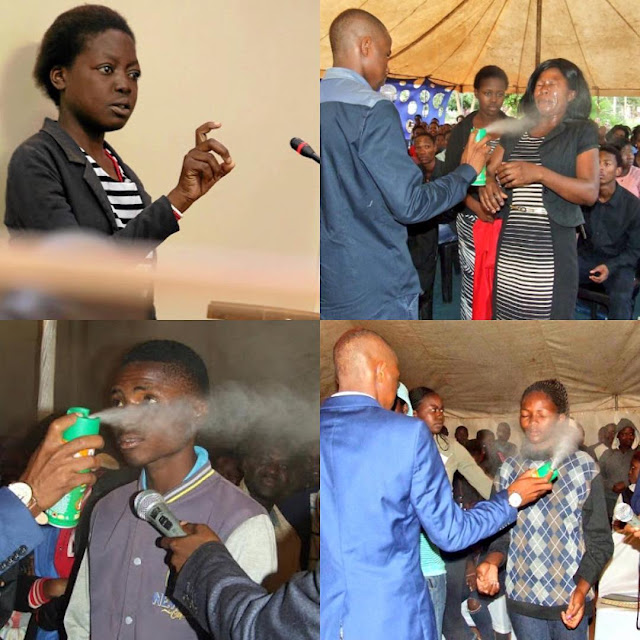 Pastor charged with assault after the congregants he sprayed with insecticide, took ill... Prophet Lethebo Rabalago from the Mountzion General Assembly in Limpopo, South Africa, is facing five assault charges for an incident that allegedly happened in November last year. . . The trial of a self-proclaimed prophet who allegedly sprayed his congregation with the Doom insecticide has been charged with assault with intent to do grievous bodily harm. . .

His trial started with testimonies by a representative of the manufacturer of Doom, Tigerbrands. . . The court also heard testimony by 20-year-old Thabiso Chabalala, who told the court that she spent seven months coughing and with swollen eyes after Prophet Lethebo Rabalago sprayed her with insecticide. . . Chabalala told the court that she regretted allowing Rabalago to spray the pesticide on her. She said she responded to calls for the sick to come forward during a church service at Phomolong township last year. . .

"I was taken by surprise. I thought that was how God instructed him to conduct the healing," she responded. Chabalala said she was sprayed with Doom twice on the same day and became dizzy. . . She said at first she thought the dizziness was part of the healing process, but she started experiencing health problems later on. "I regret it," she said. The state had also called a Grade 11 pupil who claimed he had to get help from a clinic after Rabalago sprayed him... .

The 17-year-old said he had gone to the church to seek prayers because his neck was painful. In an interview with eNCA.com last November, Rabalago claims that the insect killer is to heal people with cancer, HIV or any other illness. . . On whether he considers the danger of the chemical spray to the eyes and other body parts, he said: "With us, we believe in God is for all things. People are getting their deliverance."
Posted by cocowondersblog.com on December 14, 2017