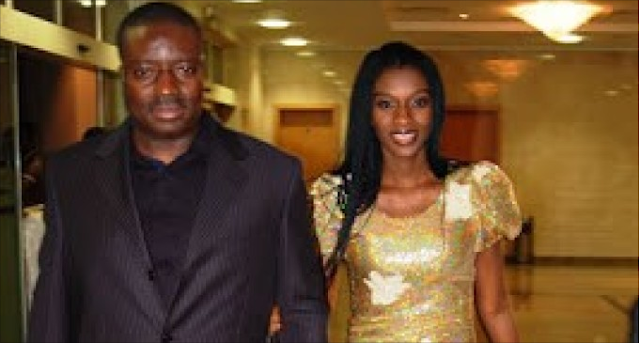 Other miseries only speak but heartbreak shrieks out. Yet each couple extinguishes the flames of their love, as it pleases them. Some do it with a bitter look, some with a flattering word. Some do it with a kiss and others by infidelity. Ask Fred and Dunni Igbinedion; the estranged couple would definitely have their pick from the pack.
Notwithstanding this immutable fact, not a few people, particularly scions of Nigeria’s filthy rich, would contend that the uncertainties of silver spoon romance, the fatalism of Cupid as well as the dilemmas of conscience and egotism all critically constitute unfair influences in the crash of so many silver spoon marriages.

However, hardly anyone knew when sour music stole into the wedlock of Fred Igbinedion and his wife, Dunni Bisiriyu. But everybody knows when their marriage crashed. It was the worst thing ever. Friends and family watched in dismay as the harsh notes intruded the couple’s joy leaving them a mess of a peculiar mess. When they got married a few years ago, many people thought that their wedding was made in heaven.

Theirs was a seemingly blissful nuptial that Dunni’s peers felt they were in her shoes, with some even wondering why she seemed to be the luckiest among them. She is young and pretty, a silver spooned kid with Ivy League education; add to that mix a husband in the mold of Fred. Esama’s son for that matter! Curiously, however, when the going was good between them, they planned to build castles in the air, have a fortress of a home with their kids rolling and frolicking on the lawn while they hold hands and give themselves a pat on the back for shaming critics who thought the marriage would not last. The plans were lofty and lovely. Before long, the seed of discord began to germinate between them. Eventually, they parted ways thus going the way of most celebrity couples whose marriages crashed and burned in record time.

Dunni vacated their matrimonial home immediately. Now, all the starry-eyed visions the couple had have been consigned to the wastebasket of history. Besides their irreconcilable differences, Fred lived on his father’s glory while Dunni had her eyes out. The couple lacked the patience and enduring maturity to surmount the several storms and challenges of marriage. Interestingly, Fred met Dunni at the University of Ibadan (UI) while he attended a Polo tournament in the Oyo State capital city with a friend. It was love at first sight for the couple. So smitten were they with each other that they couldn’t bear to part at their first encounter and afterward It was hardly surprising, therefore, that their brief encounter in Ibadan, culminated in wedlock. That marriage is no more now, and the once dashing couple with an enviable love story are estranged from each other. So long!

Source: The capital ng
Posted by Unknown on December 15, 2017