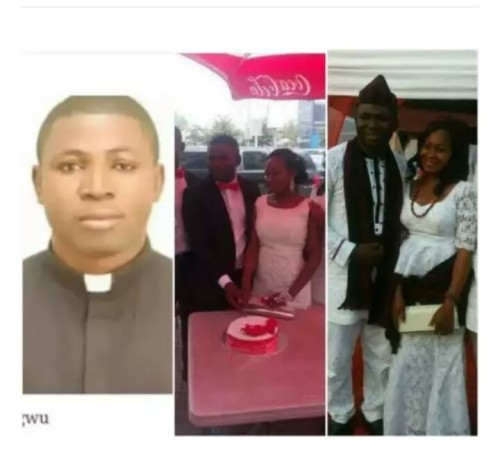 Kano-based priest, Rev. Fr Gospel Inalegwu, who recently resigned priesthood after he was freed by his kidnappers has allegedly done his traditional and court wedding.

A Facebook user by name Shadrack Okpomhe, has claimed that the priest had framed his own kidnap and eventually left priesthood so he can live a normal life.

“During the week report come in that Rev Fr Godspower Inaelegwu who resigned in Kano got married even before his resignation,also rumour has it that he actually faked his kidnap in order to quit the Priesthood, so pathetic and some persons will come and tell me to pray for him, when he himself allowed the devil to use him, acc**ulating wealth for himself through the Priesthood, this is more than sin in the side of God. He knew quite alright he wasn’t capable yet he pretended for 11 years in the seminary, its time CBCN , come up and address this issues ,it's becoming so annoying that some hungry men now see the Priesthood as an avenue to make money just as Fr Edet did ,and report coming from his end has it he is also planning to walk down the aisle anytime soon.”


via Nairaland
Posted by cocowondersblog.com on November 04, 2017