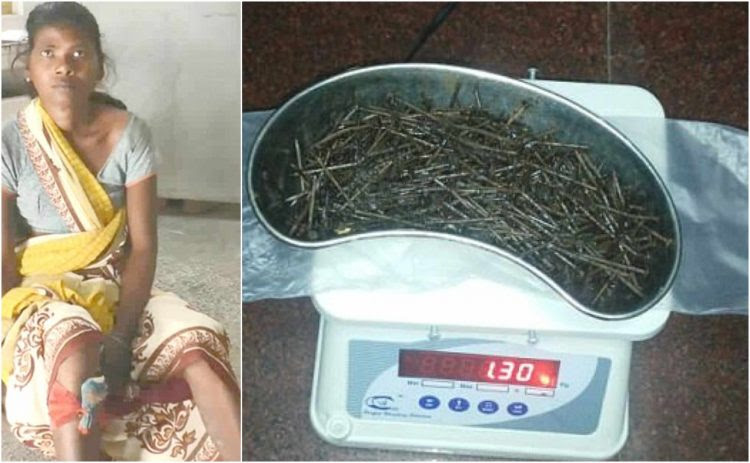 A 35-year-old Indian widow claims needles, nails, and syringes come out of her legs, and that she has no idea how they got there, Oddity Central reports.
Anusuiya, from a small village in Fatehpur district of Uttar Pradesh in Northern India, says that the bizarre phenomenon has been occurring since 2012 and that she has been in unbearable pain ever since.
Anusuiya Devi claims that she develops small cysts on her legs which eventually burst and discharge a fluid which pushes out a needle or nail. She has encountered difficulties walking, standing, and sitting, but doctors refuse to help her as they believe that she is inserting the needles herself, an accusation that she denies. The widow insists that she has never self-harmed, a claim that is backed up by her brother Awadhesh Kumar, who has lived with her for the last seven years. He does not believe his sister harms herself or does anything to her legs.

“It has been five years now and she’s in so much pain every day. I am really stressed for her,” Awadhesh told reporters, “There are three kinds of needles that come out of her body: nails, needles and syringe needles used in hospitals. We have no explanation. I’m with her most of the time, and I’ve never seen her do anything to herself which would explain this. We just want someone to help us.”
Anusuiya went to several local doctors in her district but none could help. Her brother claims that they sent her away because they could not understand her condition, and did not believe her. She was finally admitted to a district government hospital in Fatehpur, on October 25, where doctors were shocked by X-ray images that revealed over 70 pins in her legs.
“She came to us in a lot of pain. We did several X-rays including full body X-ray and we found 70 different kinds of iron needles in her legs below the knees,” surgeon Dr. Naresh Vishal said. “We did a full body scan to see if there were nails in other parts of her body but there was nothing elsewhere. We only found needles in her legs, nowhere else.”
“Medically, it is not possible for such needles to just develop in a human’s body,” Vishal added. “So far we cannot confirm how the needles enter her body, but we suspect the patient has been self-harming. We need to determine whether the patient has any kind of a mental illness and she forcefully inserts them. I have never seen a case like this in my medical career. We spotted so many needles in her legs, we cannot understand how she’s coped with the pain for so long. She will have suffered greatly.”

Dr. Vishal said that Anusuiya will be referred to Kanpur hospital so that more qualified doctors can research her condition and help her deal with this problem.
Posted by Unknown on November 16, 2017