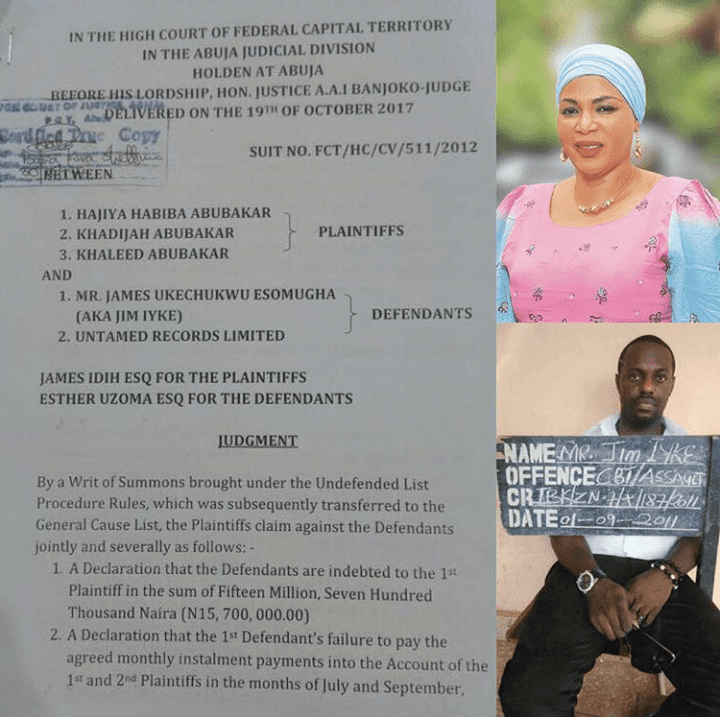 After almost 5 years of avoiding the court, Nollywood Actor, Jim Iyke has been found guilty of defrauding Nigerian socialite, Hajia Habiba Abubakar of N16 million and has been ordered
to pay N15.7m as he has initially paid N300,000 to her before.
According to Naijagists: “I would rather say, to help or invest in people nowadays is scary I took it upon myself to personally follow this Case up! In my course of studying this case, I actually found Jim Iyke has been dodging this case with so many silly excuses for years but finally he can’t run no more.
He is found guilty and indebted to Madam Habiba Abubakar. Habiba Abubakar is a woman with a Good heart, who has helped so many Nigerians far and near even beyond Africa in general with her NGO (the elderly and the poor) program, irrespective of their tribe, faith, and religion.

In all my findings, Jim Iyke took advantage of her kind gesture to defraud her of a whopping 16 million naira and thought he could scare her on Twitter by saying she is only interested in dating him.
Jim is notoriously known for fighting with several other women like Habiba Abubakar. He has been ordered to repay the remaining balance of N15.7million to Habiba as he initially paid some token back to her.
Posted by cocowondersblog.com on November 04, 2017