Politics by the police is distorting the security architecture in my state" Rivers Governor, Nyesom Wike, say 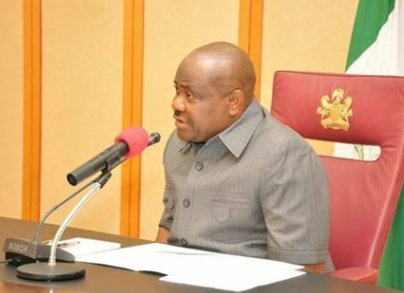 Rivers State Governor, Nyesom Wike has decried the politicization of security in the state by the Police High Command, saying that it is negatively affecting the state's security architecture.

Speaking during a courtesy visit by Course Participants of the National Defence College Study Tour to Rivers State at the Government House Port Harcourt on Monday, Governor Wike said that the state is suffering certain avoidable security infractions because of the politics introduced in security management.

Governor Wike commiserated with the families of 10 persons including a nursing mother that were killed by yet to be identified gunmen in Obio/Akpor Local Government Area in the state yesterday October 9th.
"We had a security incident, I expected the State Commissioner of Police to be here to brief me and for us to plan to forestall a recurrence, but he will not come. He may brief me over the telephone ".
The governor reiterated that the State Anti-Robbery Squad (SARS) Commander, Mr Akin Fakorede was specifically positioned in the state by the Police High Command to disorganise the State Security Architecture. He said that the same Rivers SARS Commander who was indicted by the INEC Official Election Report as being involved in the repeated rigging of elections, has been left in the state to continue to wreak havoc on the security architecture.
"We wrote to the Inspector General of Police to transfer those who sabotage our security out of the State, but he chose to leave them. Instead, the security saboteurs are busy participating in the kidnapping and armed robbery with the use of SARS platform. Every people are crying on radio about their experiences with SARs, yet the Police High Command has refused to act", he said.
He stated that certain official Federal Policies and decisions also negatively affect security in the Niger Delta. According to the governor, the Niger Delta is considered safe for the drilling of oil, but not safe for the international oil companies to have their head offices.
He stated that his administration has invested in youth development and empowerment in order to improve the security situation of the state.
Posted by Unknown on October 10, 2017