Monkey Pox: Fear Grips Lagosians as Two Suspected Cases Of the disease is Recorded in the State 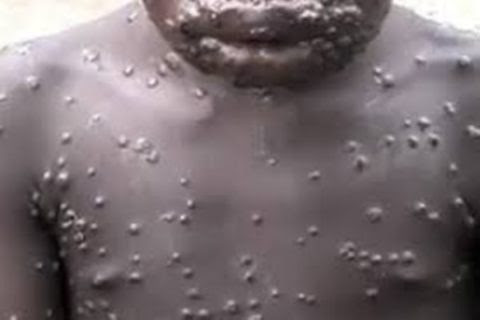 A victim of the monkeypox disease
Nigerians in Lagos state have been urged to be on the alert as the State Government on Monday revealed that two suspected cases of Monkey Pox have been recorded in the state.
The announcement was made by the Commissioner for Health, Dr. Jide Idris at a news conference on Monday. He said that the two suspected cases were currently being investigated in the state.
“Though no confirmed case has been recorded, there is need to sensitise members of the public and provide adequate information on measures for prevention and control of the disease in line with the policy of the State government,” he said.

What to do to avoid the disease
1. Avoiding contact with squirrels, rats and monkeys especially animals that are sick or found dead in areas where monkeypox occurs.
2. Always wash hands with soap and water after contact with animals or when caring for sick human relatives or soiled beddings.
3. Health care workers are strongly advised to practice universal precautions while handling patients and/or body fluids at all times.
4. Be familiar with the symptoms and maintain a high index of suspicion.
5. All suspected cases should be reported to the Local Government Area or State Disease Surveillance and Notification Officers
Posted by Unknown on October 10, 2017