Meaning of SSSS on a boarding pass...

Airline passengers who find 'SSSS' stamped on their boarding passes will face extra security checks and delays, it has been revealed. 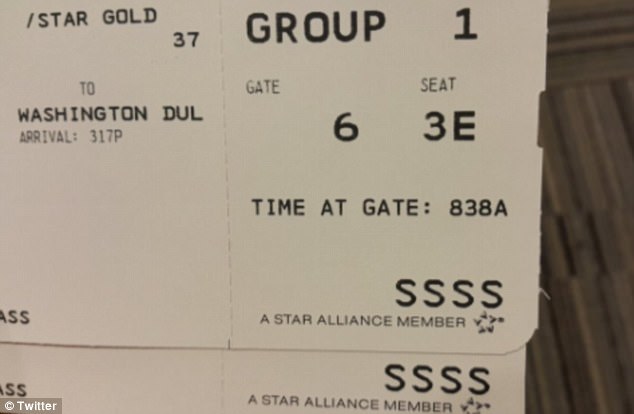 This is because of the innocuous-looking code, which applies to travelers flying into the United States, stands for 'Secondary Security Screening Selection'.
It means the pass holder has been selected to undergo a more extensive security screening process before boarding their flight that can take up to half an hour.

The screening process, which may include bag searches, pat downs and validating identity, is conducted by the Transportation Security Administration.


The TSA insists travelers who receive the 'SSSS' are selected at random, but some have claimed they have pulled aside most times they travel, according to Lifehacker.
Buying one-way tickets or paying in cash could land passengers on the TSA's secret list and lead to frequent 'SSSS' checks, the publication said.

A passenger may be able to tell they will have to undergo additional checks if they are unable to print their boarding pass at the airport's self-check-in.
Failure to take part in the enhanced security screening will result in the traveler being denied boarding.
The scheme was introduced after the 9/11 terror attacks, to help security officials monitor potentially dangerous individuals from entering or leaving the U.S.

Secondary Security Screening Selection or Secondary Security Screening Selectee, known by its acronym SSSS, is an airport security measure in the United States which selects passengers for additional inspection. The passengers may be known as Selectee, Automatic Selectee or the Selectee list.  The number of names on the list fluctuates and is a secret, although the Transportation Security Administration apparently says there are tens of thousands of names on it.
The Selectee list has been cited by civil liberties groups to be infringing on privacy rights and potential for racial and ethnic discrimination

info from dailymail and Wikipedia