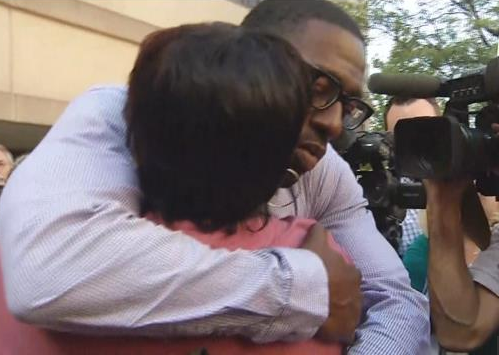 A man has regained freedom after 23 years since he was wrongly convicted and sentenced to two life sentences. His very first words after the freedom were touching.
In a photo that has surfaced online, Lamonte McIntyre hugged his mother for the first time as a free man in 23 years after the 41-year-old Kansas native who was wrongly convicted of a double murder finally regained freedom after spending more than half of his life behind bars.
According to reports, McIntyre who was serving two life sentence spoke for the first time and his first words were: “It’s nice outside.”
He  was originally convicted at the age of 17 on the testimony of witnesses who later recanted. Prosecutors presented no physical evidence or motive to tie him to the 1994 murders.

A judge was reconsidering the case in court hearings that were scheduled to last into next week, when the new prosecutor in the case said in a news release that new information cast doubt on witness identification of McIntyre as the killer, and that a jury might have not convicted him.

“In light of information learned by my office since I began in January,” Wyandotte County District Attorney Mark Dupree said, “my office is requesting the Court find that manifest injustice exists.”  The original investigators of the daytime shooting never issued search warrants nor discovered a link between McIntyre and the victims, according to The Washington Post. He was arrested after less than 20 minutes of interviews.  “The investigation was hasty and superficial,” said the Midwest Innocence Project, which helped free McIntyre.

McIntyre has always maintained his innocence.  His mother Rose McIntyre, who was present when he was arrested decades ago, on Friday thanked “everybody who never gave up on my son,” according to the Kansas City Star, which reported that there were many tears in the courtroom when the man was finally freed.  “He (the judge) said,

‘You’re free.’ I almost hit the floor,” The Star quoted Rose McIntyre as saying.  “I want him to feel the sunlight.”