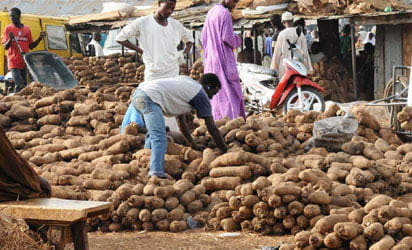 A man has lost his life as a result of just one tuber of yam. The unfortunate incident happened in Enugu.

Punch reports that the Enugu State Police Command has commenced an investigation into the alleged killing of a man for stealing a tuber of yam in Amorji Nike community of Abakpa axis in Enugu.

The command’s spokesman, SP Ebere Amaraizu, said in a statement in Enugu on Saturday that the incident happened on Oct. 4.

Amaraizu said that the incident took place at Amorji Nike community of Abakpa axis in Enugu East Local Government Area of the state.

“It was gathered that a man whose identity is yet to be established was allegedly beaten to death on Oct. 4 at Amorji Nike, Enugu for stealing a yam tuber.

“His corpse was dumped in a compound from where it was recovered,’’ Amaraizu said.

According to him, investigations have commenced, while two suspects have been arrested in connection with the incident.

“The arrested suspects are currently helping police operatives in their investigations,’’ he said