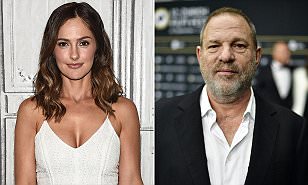 Minka Kelly is the latest actress to come forward and claim that she was sexually harassed by Hollywood heavyweight Harvey Weinstein.

In a lengthy post on Instagram, the star wrote I met Harvey at an industry party. The following day, my agent said he wanted to see me for a general meeting. The location was set for his hotel room. I wasn’t comfortable with going to his room & said so.

The following day, we sat down with an assistant in the hotel restaurant. He bullshit me for 5 minutes re: movies he could put me in, then asked the assistant to excuse us. As she walked away, he said, "I know you were feeling what I was feeling when we met the other night” and then regaled me with offers of a lavish life filled with trips around the world on private planes etc. IF I would be his girlfriend.

Or, “We could just keep this professional.” All I knew was not to offend this very powerful man and to get out of the situation as quickly as possible. I told him while flattered, I'd like to keep things professional. He said “Fine. I trust you won't tell anyone about this.” I said “Of course not.

Thank you so much for taking the time to meet with me,” - the only way I could think to shut it down gracefully and excuse myself.
I immediately told my agent what happened. We marveled at his audacity, reinforced my instinct not to offend him & laughed at how glad I was to get out of there. Neither of us were that surprised as this wasn’t  far off from the day-to-day bullshit of being an actress.

I'm sorry for obliging his orders to be complicit in protecting his behavior, which he obviously knew was wrong or he wouldn’t have asked me not to tell anyone in the first place. For making him feel ok about the gross things he was saying and that I felt my only route was to say I was flattered.

For not insisting that my reps never allow anyone to take a meeting in a hotel room (with him or anyone else), because I honestly don’t know what might have happened if I’d just showed up as originally scheduled.

I am appalled for all the women being told these occurrences are in any way their fault. No more Harvey Weinstein in Hollywood does not solve the problem but maybe the more voices sharing their stories and adding support to the countless women and men who have suffered through abuse of power, the less it will be tolerated.
Posted by cocowondersblog.com on October 14, 2017