‘Tonto Dikeh is type of woman that you can beat, go to sleep and she will stab you before the next morning’ – Olakunle Churchill...

Tonto Dikeh alleged that Churchill’s father was former President Olusegun Obasanjo’s gardener, that he had a hand in a miscarriage she had while with him and that he brutalized her. 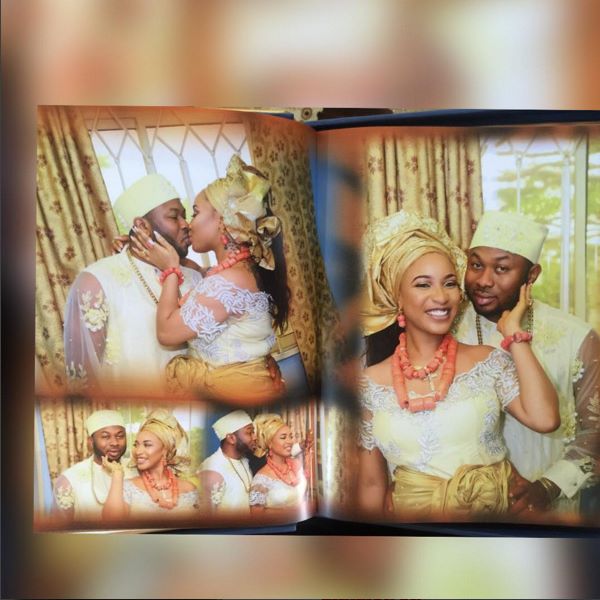 Someone asked him his thoughts, and the businessman in a lengthy reply took the time to explain himself, he wrote;

“I’ll take time out from my very busy schedule to address these lies quickly. King’s mother had him through CS operation … it wasn’t a natural birth. Her healing process took 3 months and the doctor strongly advised against copulation for the said period.

We lived together for only six months and with 3 months without copulating a 4 months pregnancy that got terminated by domestic violence is an impossibility which clears me of the claims of being a murderer and causing her to lose the said pregnancy that was a figment of her imagination to make the false claims believable. 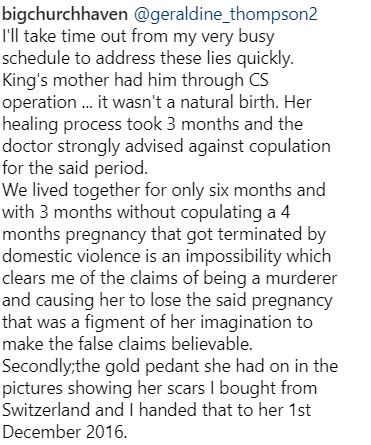 Secondly; the gold pendant she had on in the pictures showing her scars I bought from Switzerland and I handed that to her 1st December 2016. Just 2 days after the incident at my mom's house she held an event where she fixed roads for the disabled colony without makeup and she had no facial scars;

Dec 22, 2016, which backs up my claims that I never raised my hands to her throughout all the damage she wrecked; also the last time I saw this woman was in December.Google is free and you can graciously use that medium to confirm that what I just said is the truth and nothing but the truth.

About being the son of a gardener; my mom's pictures are on the internet, she had been living in the U.K before I was born. Does she look like a gardener’s wife? So what if my father was a gardener? Which he apparently wasn’t, our Lord Jesus was born a carpenter’s son. Where you come from should never determine the limits to your greatness in life. My father wasn’t a gardener; that’s very untrue. I never raised my hands against my ex-wife.

She was the one who violently attacked me with knives and weapons at every altercation. I am a man of few words and I do not my fight at all neither can I cause bodily harm to any human. I was raised better than that. Scornful people will stop at nothing to taint people’s image but it is God’s work to vindicate a man. People need to stop getting bamboozled by lies they read on social media; anyone can lie about sensitive matters to get public sympathy but it takes real eyes to recognize real lies. 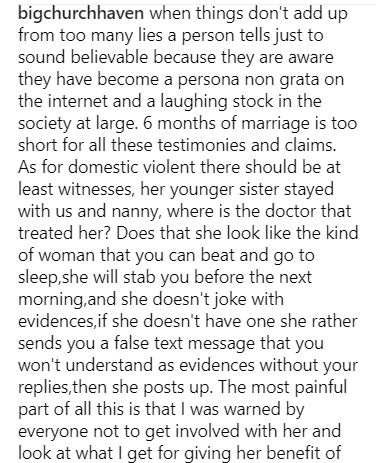 When things don’t add up from too many lies a person tells just to sound believable because they are aware they have become a persona non grata on the internet and a laughing stock in the society at large. 6 months of marriage is too short for all these testimonies and claims. As for domestic violent there should be at least witnesses, her younger sister stayed with us and nanny, where is the doctor that treated her?

Does that she look like the kind of woman that you can beat and go to sleep, she will stab you before the next morning,and she doesn’t joke with pieces of evidence, if she doesn’t have one she rather sends you a false text message that you won’t understand as evidence without your replies, then she posts up.

The most painful part of all this is that I was warned by everyone not to get involved with her and look at what I get for giving her benefit of the doubt. The only good thing that came out of that relationship was my King so I just take it all as one of those things that life throws at you.” 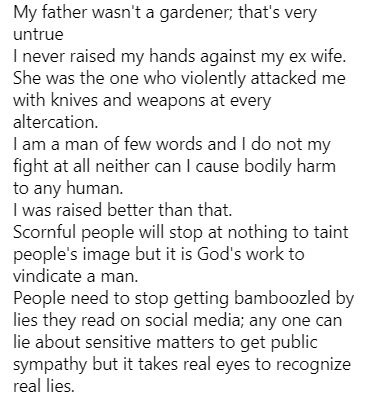 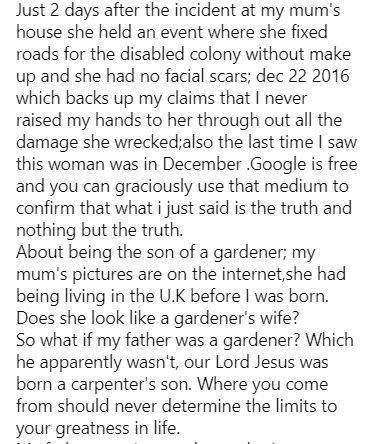 Posted by cocowondersblog.com on September 30, 2017