President Donald Trump is delivering a major address to the United Nations General Assembly on Tuesday, where he is expected to discuss threats to global stability -- including the Iran nuclear deal, nuclear-armed North Korea, and global terrorism. 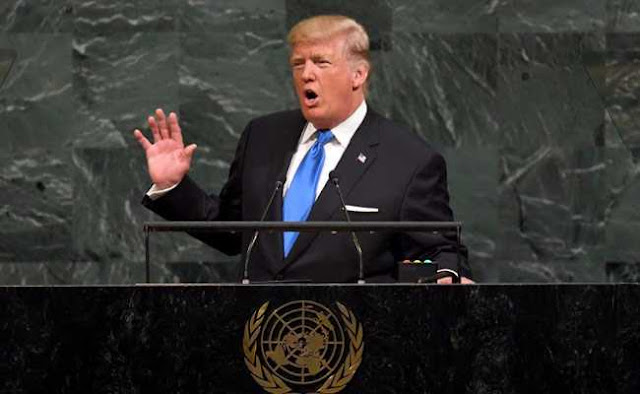 The president addressed the UN on Monday at a UN reform meeting but this will mark his first formal address to the 72nd session of the joint body.

Trump: "We need to defeat the enemies of humanity"

In his final words to the body, Mr. Trump said, "Our hope is a world of proud independent nations that embrace their duties, seek friendship, respect others and make common cause int he greatest shared interest of all, a future of peace for the people of this wonderful earth."
He says that the true vision and mission of the UN and the message to the world will be that we will "fight together, sacrifice together and stand together" for peace, freedom, justice, family for humanity.

"Maduro has inflicted terrible pain and suffering on good people of his country," said Mr. Trump of the dictator.
Mr. Trump calls the unfair election in the region and the starvation of freedom of its people "completely unacceptable and we can not stand by and watch, we and all other share a goal that goal is to help them regain their freedom recover their country and restore their democracy."
His remark that "the problem is that socialism has been faithfully implemented in Venezuela" receives very little applause or positive reaction from the body.

Powerful people in this room under the guidance of the UN can solve many of these vicious and complex problems," said Mr. Trump, but noted that the UN "can be a much more accountable and effective advocate for human dignity and freedom around the world."

In harsh tones to the international body, Mr. Trump says the Iran nuclear deal provides a "cover for the potential construction of a nuclear program" in the region.
The president says the U.S. can't abide by an agreement if Iran continues destabilizing activities.
Calling it "one of the worst and one-sided transactions the U.S. has ever entered into", Mr. Trump warns the assembly that "you haven't heard the last on it, believe me."

The president calls the North Koreans a "depraved regime" saying they are responsible for the starvation deaths of millions, and for imprisonment torture and oppression of countless more" citing the death of American student Otto Warmbier.
Mr. Trump says their "reckless pursuit of nuclear weapons and ballistic missiles" threaten the entire world with unthinkable loss of human life.
The president says it's outrageous that some nations would trade or financially support "a country that imperils the world with nuclear conflict."
In a warning to North Korea, who Mr. Trump called a "band of criminals" he said the U.S. has"great patience" but that America will have no choice but to "totally destroy" North Korea if they continue their provocations.
The president called out dictator Kim Jong Un, who he refers to as "Rocket Man" saying the U.S. is "ready, willing and able, but hopeful this will not be necessary"

"We must protect our nations their interests and their futures. we must reject threats to sovereignty from the Ukraine to the south China sea," says Mr. Trump, publicly recognziing  the global threats posed to the U.S. and abroad.
He adds, "We must uphold respect for law, borders and culture and the peaceful engagement these allow and just as founders of this body intended we must work together and confront together those who threaten us with chaos, turmoil and terror."

Trump: "We can no longer be taken advantage of"

"As long as I hold this office I will defend America's interest above all else but in fulfilling our obligations to our own nations we also realize its in everyones interest to seek the future where all nations can be sovereign prospersous and secure," Mr. Trump says.
He says that "America does more than speak for the values expressed in the UN charter", adding that Americans have paid the "ultimate price to defend our freedom and the freedom of many nations."

Trump: "Our success depends on a coalition on strong, independent nations"

"We do not expect diverse counties to share the same cultures or system of government but we expect all nations to uphold these sovereign duties, to respect interest of own people and rights of every other sovereign nation."
Mr. Trump embraces the idea of "mutual respect" between nations to allow "individuals to flourish in the fullness of the life intended by God."

"Authoritarian powers seek to collapse the values the system and alliance that prevented conflicted and tilted the world toward freedom since WWII, says Mr. Trump of the treats posed to the international body.
Mr. Trump shifts to addressing poverty and providing a world "free from violence, hated and fear" for children the world over.

The president says its honor to welcome the body of world leaders to his home town, and takes time to express appreciation for every lader who has offered assistance and aid to those suffering in the wake of Hurricane Harvey and Irma.

Trump receives the formal introduction to address the joint body of the General Assembly to a round of small applause.

President Trump arrives to the UNGA with First Lady Melania Trump and U.S. Ambassador to the UN Nikki Haley ahead of his speech.

Trump tweets ahead of UN speech

President Trump tweets of his "big day" at the United nations, saying "many good things, and some tricky ones, happening."

While the president writes that his speech will take place at 10:00 AM, Mr. Trump is slated to speak 4th in line in this morning's plenary sessions. Exact timing will depend on how long the leaders before him speak, but he is anticipated to being his address at 10:30 AM ET.