McDonald's Employee Tries To Flush Baby Down Toilet After Giving Birth At Work ...

A McDonald's employee was charged with attempted murder for allegedly trying to flush her newborn down the toilet after giving birth in a bathroom stall during her shift. ⠀ 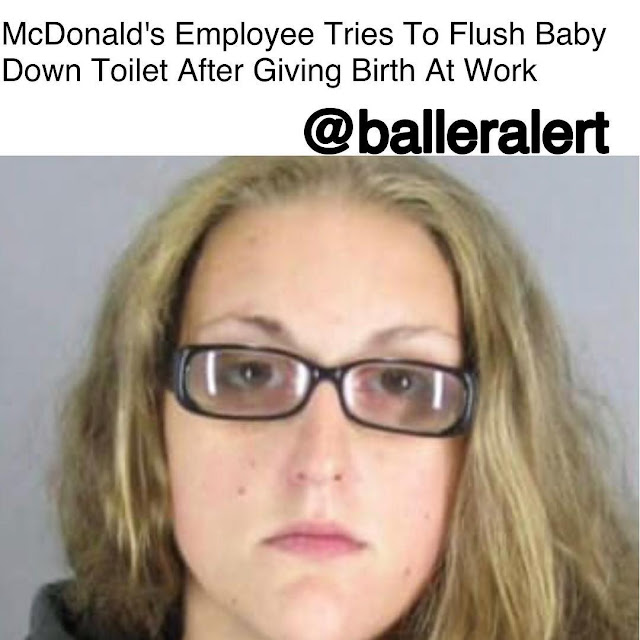 According to Wagstaffe, after Lockner went to the bathroom, a co-worker grew concerned and went to check on her. ⠀⠀⠀⠀⠀⠀⠀ ⠀⠀⠀⠀⠀⠀⠀
After entering, the co-worker discovered blood on the floor. Lockner allegedly told her co-worker she was just having a heavy period, but a second co-worker allegedly saw Lockner pushing the newborn baby boy face-down into the toilet water. ⠀⠀⠀⠀⠀⠀⠀ ⠀⠀⠀⠀⠀⠀⠀
When police arrived, the baby was not breathing and did not have a pulse, but was rushed to a nearby hospital where he remains in stable condition, though doctors are unsure if brain damage occurred. ⠀⠀⠀⠀⠀⠀ ⠀⠀⠀⠀⠀⠀⠀ ⠀⠀⠀⠀⠀⠀⠀
Lockner, who reportedly told officials she did not know she was pregnant, is being held on $11 million bail.
Posted by cocowondersblog.com on September 15, 2017