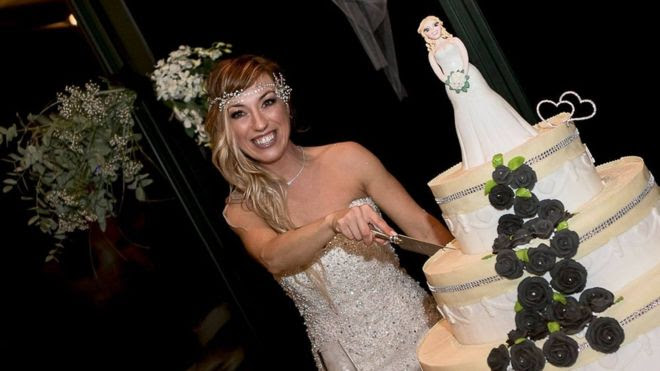 Laura Mesi married herself at a fairytale wedding
An Italian woman has married herself in a ceremony complete with white dress, three-layer wedding cake, bridesmaids and 70 guests.
"I firmly believe that each of us must first of all love ourselves," said Laura Mesi, a 40-year-old fitness trainer. "You can have a fairytale even without the prince."
The ceremony carries no legal weight.
But Ms Mesi is part of a growing trend for self-marriage - dubbed "sologamy" - in countries around the world. Proponents of such ceremonies say it is about self-love and acceptance, and claiming the social affirmation normally reserved for couples who wed.

Laura says the idea of a solo wedding came to her two years ago, after a 12-year relationship ended.
"I told friends and family that if I had not found my soul-mate by my 40th birthday I would marry myself," she told La Repubblica newspaper.
"If one day I find a man with whom I can plan a future I'll be happy, but my happiness does not depend on him."
Ms Mesi says she is the first Italian woman to hold a solo ceremony. In May, a man, Nello Ruggiero, said "yes" to himself in a ceremony in Naples. In Japan, a travel agency began offering bridal ceremonies for single women in 2014. 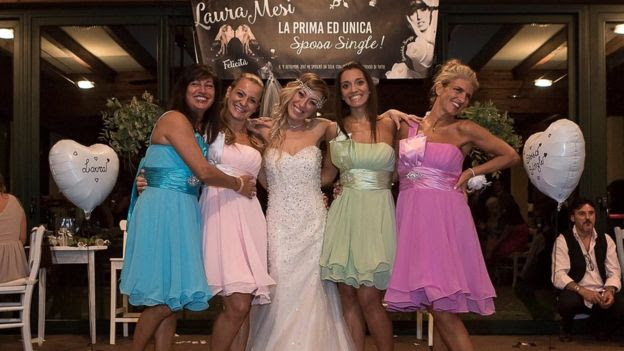 Reports of people marrying themselves go as far back as 1993. It has spawned a number of books and been a theme of episodes of Sex and the City and Glee. In the US, a website called I Married Me offers self-wedding kits. In Canada, an agency called Marry Yourself Vancouver which has been running for more than a year attributes the rise in solo weddings to the growing numbers of single people.
"Single is the new normal. Celebrate your solo status!" it urges.
But not everyone welcomes the trend, with some calling it narcissistic, and others criticising it as a pointless submission to a patriarchal institution.
Among the congratulatory comments left on Ms Mesi's wedding photos are others: "So sad", "you're out of your mind" and "there's something wrong with your brain".
Last month, British self-wedder Sophie Tanner told BBC Three some people called her "a sad feminist". Ms Mesi has brushed off the catty comments, saying "nothing and no-one can turn off my smile". But in media interviews she acknowledges that solo weddings might not be for everyone. To marry yourself, she says, you need a certain amount of money, the support of those around you, and - above all - "a pinch of madness".
-Culled from BBC News
Posted by Unknown on September 27, 2017