Wow twins born by the same parents but have different races.. When pregnant Donna Douglas and her husband Vince Aylmer went for a scan in 1996, they discovered that they were expecting twin girl.

The expectant parents who already had three children were excited, but despite all the preparations they’d make to welcome two new additions to the family, nothing could have prepared them for the shock they received in the delivery room. Maria and Lucy Aylmer were born on January 16, 1997, in Gloucester, England. They have the same mom and dad and are, in fact, twins. However, their mom was shocked when the twins were handed to her in the delivery room. The twins looked nothing alike! Throughout the girls’ young lives, their mom would dress them in identical outfits. Nonetheless, it did nothing to conceal the difference in their appearances; the two girls didn’t look like sisters, not to talk of twins. In fact, while they were growing up, the girls struggled to convince people that they were even sisters. 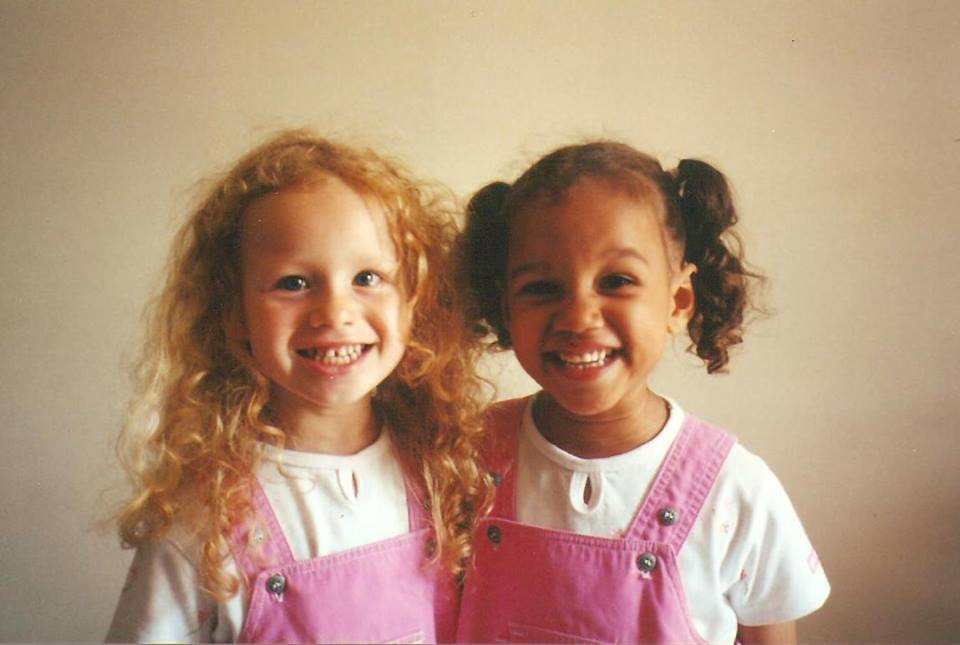 “No one ever believes we’re twins,” Lucy said. “Even when we dress alike, we still don’t look like sisters, let alone twins. Friends have even made us produce our birth certificates to prove it.”
“We were in the same class, but no one had a problem telling us apart. Twins are known for swapping identities, but there was no way Maria and I could ever do anything like that.” The girls’ mom, Donna Douglas, a 49-year-old warehouse worker, is mixed race with white and Jamaican heritage. While their dad, Vince Aylmer, a 55-year-old scaffolder, is white. As non-identical twins, Lucy and Maria were born from separate eggs, so they didn’t necessarily inherit the same genes. The twins’ older brothers, George, 25, and Jordan, 23, and their older sister Chynna, 24, all have a light-brown skin tone. Maria and Lucy, however, bookend their siblings: Lucy has a very fair complexion; Maria’s skin is a darker tone. As Lucy explained, “Our brothers and sisters have skin which is in between Maria and I. We are at opposite ends of the spectrum and they are all somewhere in between. But my grandmother has a very fair English rose complexion, just like mine.” Maria often envied Lucy’s straight hair. As she admitted to Inside Edition, “I used to cry about it. I hated my curly hair.”
For Lucy, things hit a low point when she was bullied at school. “They thought I was adopted and called me a ghost,” she recalled tearfully. The girls’ differences don’t end with their skin color, either. For instance, Lucy has blue eyes, while Maria’s are brown. Lucy is also a red-head and prefers to straighten her natural curls, and Maria’s hair, by contrast, is a mass of thick black curls.
Their differences, however, did take a toll on the young twins. By the time they turned ten, they told their paents they no longer wanted to dress alike. Lucy even admitted that she didn’t feel like a twin. “We don’t look alike. So why should we have to wear the exact same thing?” she said. While they were never at war, it seems that their individuality inevitably created a distance between the twins. It’s a gap that Lucy feels could have been bridged had they looked more alike. “I think if we’d looked similar or even identical, then the bond between us would have been stronger when we were younger,” Lucy told Yahoo Style in 2015. “But Maria and I had such different personalities, too. She was the outgoing twin whilst I was the shy one.” With age, though, the twins have grown much closer. Lucy told Yahoo Style, “Now we have grown older, even though we still look so different, the bond between us is much stronger.” They even consider themselves best friends.