14-year-old Maa Abena who got into a fight with her 13-year-old Faustina Korankye over a boyfriend in the neighborhood,  was beaten to death in the fight that happened at Asamang in Afigya Sekyere East Constituency of the Ashanti Region, Ghana. 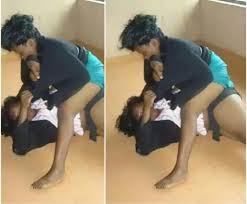 In an interview with Abusua FM’s Osei Kwadwo, the deceased’s family member disclosed that Maa Abena was stabbed by her friend Faustina Korankye, but thanks to the efforts of doctors she survived.
However, after she got discharged she got into another fierce fight on Thursday evening with Faustina, who punched the same spot the deceased was stabbed last month with a hefty blow, sending Maa Abena to the ground writhing in severe pain.

Adomonline reports that the deceased was rushed to Asamang Government Hospital for treatment but she lost her life. Her body has been deposited at the hospital’s morgue pending an autopsy.
The family of the deceased however failed to confirm or deny rumours that the two were fighting over a man, as Faustina Korankye who has been arrested by Effiduase Police Command, is already helping with investigations.
Posted by Unknown on August 14, 2017