The deal was completed around 9 pm on Thursday night after another extraordinary day which at one point threatened to turn into a major dispute between the Spanish and French leagues. Neymar will be presented at a press conference on Friday at the Parc des Princes and to the supporters at PSG’s stadium before Saturday’s league opener against Amiens. 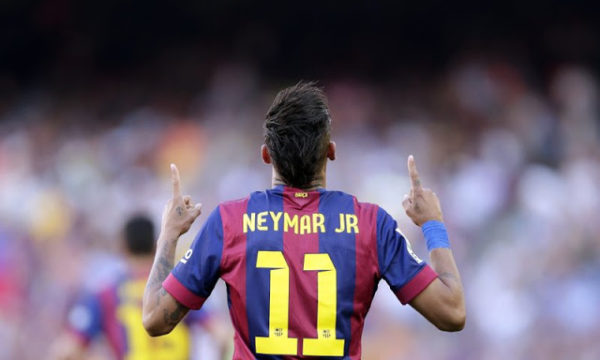 Speaking for the first time about the move, Neymar said:

“I am extremely happy to join Paris St-Germain. Since I arrived in Europe, the club has always been one of the most competitive and most ambitious. And the biggest challenge, what most motivated me to join my new teammates, is to help the club to conquer the titles that their fans want.

“Paris St-Germain’s ambition attracted me to the club, along with the passion and the energy this brings. I played four seasons in Europe and I feel ready to take the challenge. From today, I will do everything I can to help my new teammates, to open up new horizons for my club and to bring happiness to its millions of supporters around the world.”

The transfer that has changed the power dynamic in European football was masterminded by PSG president Nasser Al-Khelaifi, who said that the deal underlined the club’s ambition.

He added: “In six years, we have built a very ambitious project that has already taken us to the highest level of national and European football. With the arrival of Neymar Jr, I am convinced that we will come even closer, with the support of our faithful fans, to realizing our greatest dreams.” Earlier in the day, Barcelona announced that, as per Spanish league rules, Neymar’s lawyers had deposited his £198 million (€222 million) buy-out clause at the club which triggered the “unilateral termination” of his contract in Spain.

But not before the Brazilian’s lawyers had been sent packing by the Spanish Liga office in Madrid where they had originally tried to make the payment, a convention in transfers involving Spanish clubs, where buy-out clauses are universal.
A statement from Barcelona confirmed that Neymar’s buy-out fee had been paid and he was no longer contracted to the club. Barcelona said: “On Thursday afternoon Neymar Jr’s legal representatives visited in person the club’s offices and made the payment of €222 million in the player’s name with regards to the unilateral termination of the contract that united both parties.

“As such, the club will pass on to Uefa the details of the above operation so that they can determine the disciplinary responsibilities that may arise from this case.” Barcelona remains skeptical that PSG can pass the Uefa Financial Fair Play (FFP) regulations which will determine whether they can play in the Champions League in the 2018-19 season – the earliest the Neymar deal can be taken into account by the governing body. The animosity between the two sides in recent days is just a taste of the likely reaction to next year’s Uefa FFP verdict on PSG’s accounts.