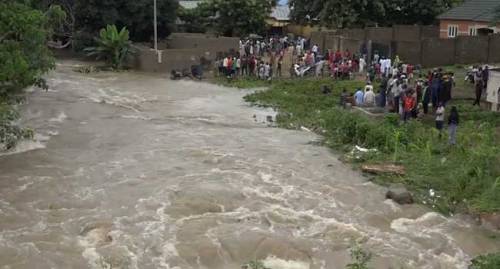 The Executive Secretary of the State Emergency Management Agency (SEMA), Mr. Boniface Ortese, who disclosed the this on Wednesday said over 2,769 households were also affected. He explained that places affected included Achusa, Idye, Wurukum Market, Genabe, Industrial Layout, Demekpe, Wadata Market, Katungu, behind the Civil Service Commission, Agboughul-Wadata among others in Makurdi. “In Achusa, 200 houses were affected with 5,125 persons displaced. In Idye, 217 houses with 5,200 persons displaced.

He said the government is doing everything within its little resources to assist flood victims in the state. The state government has, however, announced the official opening of two camps for Internally Displaced Persons (IDPs) in the state. Governor Samuel Ortom made the announcement after inspecting flooded areas within Makurdi and its environs. Mr. Ortom said the empty International Market and the Presidential Building at Agan Toll Gate would become camps for IDPs, pending when water level would subside. He explained that his administration would do everything possible to provide minimum comfort to all displaced persons while in camps.

"As you can see, the level of flood water is increasing, and more houses are being submerged and more of our people are displaced." “We hope the Federal Government will come to our aid as soon as possible; the flood committee headed by my deputy will ensure that victims have minimum comfort while in the camps," he said.
Posted by cocowondersblog.com on August 31, 2017