Horrible tale of a 9 year old raped and abused for years by her step dad.

This disturbing tale of how a child was subjected to one of the worst cases of physical, mental and sexual assault for years has left readers shocked. Danni Smith, now 26, began suffering physical abuse as early as when he was just six months, probably earlier. He was neglected by his mother, beaten, starved, imprisoned and raped by his step-dad for nine years. His stepfather also passed him to other pedophiles to rape. His mother admitted the sexual assault may have begun when Danni was just four.
Social workers first ­noticed unexplained bruising on his face when he was just six months. At age 4, social workers saw him watching porn. Months before, they( social workers) ­saw Danni locked in a ­bedroom with black leather handcuffs round his ankles, yet they refused to interfere, instead they removed him from the child protection register several times.

Danni would often be handcuffed for days in a locked bedroom and starved regularly to the extent that he had to feed on plaster from the walls. As early as age 2, he started to rummage through bins for food.  He would turn up at school so filthy and infested with head lice that no child wanted to be his friend. Yet he dreaded going home and once threw a table at a teacher so he’d be kept behind after class.
Danni repeatedly attempted suicide and even threatened it in front of a social worker when he was seven. It wasn't until June 1996, when he was 9, that social workers had taken him into care, two years after neighbors told social ­services of their fears he was being abused.
When he was taken into care aged nine, doctors identified horrific injuries to his genitals consistent with brutal sex abuse. Before this, social workers ­observed him, aged four, watching porn. His stepdad’s filthy collection, including child abuse and bestiality images, were on the same tapes as his cartoons.
Danni, who was born a girl, has now changed his name and identifies as trans-masculine. For 11 years, he was involved in a legal battle to get the files which reveal the shocking negligence he suffered. But council chiefs repeatedly tried to block him from accessing the records showing the horrors by claiming it would be bad for his mental health. He first applied for the records when he turned 16 in 2006. Legally they should have been sent to him within 40 days. The files reveal what the authorities knew about his childhood but they tried to prevent him from accessing them.

Danni has now won a five-figure payout from Brighton and Hove Council after 11 years.
Speaking to Sunday People about his horrific childhood, Danni said: "Most people’s earliest memory is something to treasure. Mine is of being raped by my stepdad. When I wasn’t being abused, I was locked in a room for days on end, often handcuffed. It was filthy and there were animal ­faeces everywhere. The only food I was ever given was a Marmite sandwich, twice a week if I was very lucky. I never had a birthday or a Christmas present. I’d ask ­strangers to be my mummy.
"Social workers knew what was happening and chose to do ­nothing. No one who failed me has ever said sorry. I think they hoped I’d give up trying to find out why they turned their backs on me, but I never would have let it go. I’m determined this won’t happen to another innocent child."
He continued: "Before my second birthday, I was rummaging in bins looking for food. I’d be lucky if I was given two sandwiches a week. On one rare visit to my aunt’s, I was astonished when she gave me a proper meal and asked if I’d had enough to eat. Our house was utterly filthy but I thought it was normal to be locked in a room for days without food, or tied up and handcuffed.
"Like any small child, I was desperate for a hug, for someone to tell me that they loved me or that they were proud of me but it never happened. Instead, I have sexually abused over and over again. It was excruciating, because I was so little. I knew it was wrong but I didn’t dare speak out for fear of what my stepdad would do. Sometimes, he’d let others abuse me, too. I was worthless to him."
Danni once became fed up with the abuse and opened up to neighbours who then informed social services but it took them six months to launch a probe. Yet just months later social workers considered ending their involvement with the family.
Danni said: "I could’ve been spared a lot of this trauma if information had been acted on earlier. By the time I was taken into care, the damage was done. I had no idea what it felt like to be loved or cherished."
Just weeks after being taken into care, Danni’s interim foster carers threw him a party for his ninth birthday and showered him with gifts.
He said: "I burst into tears. I was so bewildered and confused by the unconditional love and attention. No one had bought me a birthday gift before."
The trauma Danni suffered in his early years continued to haunt him even after he was taken into care. He began self harming and drinking alcohol. He wrote a poem about cutting himself called Dance with the Silver Devil. Danni has post-traumatic stress disorder and fears he’ll never find love or have his own family. 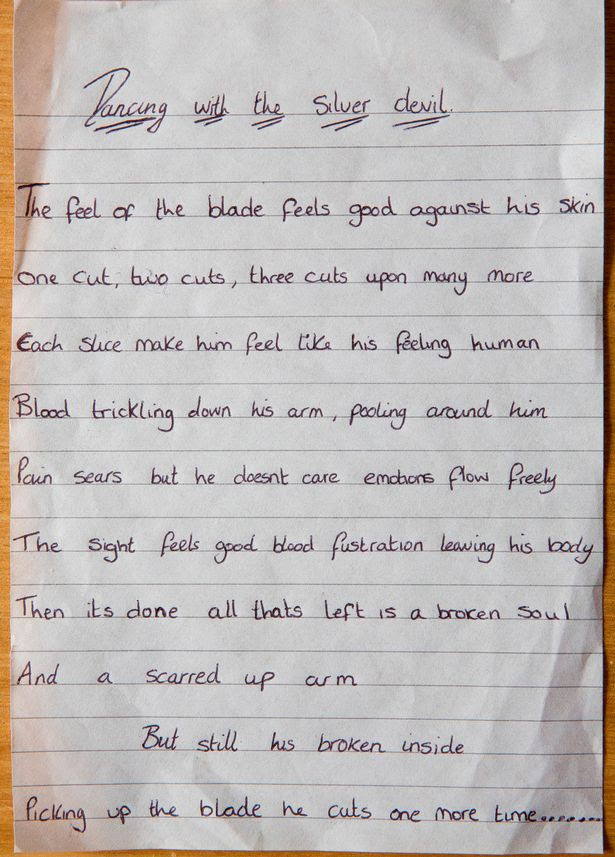 He said: "I grew up thinking it was impossible anyone would ever love me. That’s something which is very hard to shake off. I’d be terrified to bring children into the world where such evil exists."
In 2015, his stepdad was jailed for 22 years at Hove Crown Court after being found guilty of six counts of indecent assault, five of rape and two of sexual assault against another child, aged just four. Danni did not feel strong enough to give evidence against him.
Danni's mum has divorced his stepdad but still lives in the house where Danni was abused. He said she had never been a mum to him and he is glad his stepdad is in jail.
Posted by Unknown on August 28, 2017