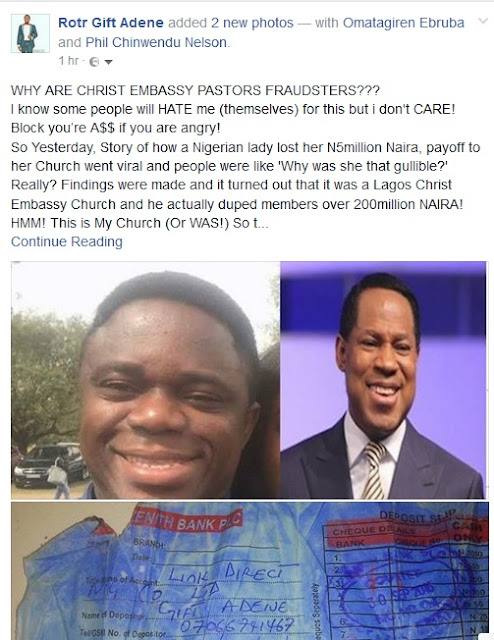 
WHY ARE CHRIST EMBASSY PASTORS FRAUDSTERS???
I know some people will HATE me (themselves) for this but i don't CARE! Block you’re A$$ if you are angry!
So Yesterday, Story of how a Nigerian lady lost her N5million Naira, payoff to her Church went viral and people were like 'Why was she that gullible?' Really? Findings were made and it turned out that it was a Lagos Christ Embassy Church and he actually duped members over 200million NAIRA! HMM! This is My Church (Or WAS!)


So this man in this Picture with Rev Chris is nothing less than the other one! He is also a Christ Embassy State Pastor (Nasarawa State), His name is Ovie Okorodudu (pastor_ovie@yahoo.com) He did same thing [even worse] to church members last year! What made his own worse was that, he duped over 5 Christ Embassy state churches!! Worth Millions of Naira. Can we call this one a pastor again? This is how he operates.

He comes to you pastor and tells him/her he has a business idea, his company’s name is LinkDirect LTD (investwithlinkdirect@gmail.com) that he is into Swiss Golden and each member should invest with at least 150K! and you will get your money + Interest in 4 months time (at least 2 million Naira)! Wow, how sweet! Members hustled for the money, some borrowed to pay back with interest, other collected loans from association and their offices.


This Man did all this in Katsina, Abuja, Owerri, Benin, Nassarawa and Many other churches.... In Katsina alone, he made over 8million Naira! [with one man (name withheld) investing 1.2million naira]- This happened in September/October 2016. Then i needed money to assist my mother for her house rent in Kaduna, instead of doing so, i used my money and invested in the SHAM thinking it would yield results and I’ll make it up to her because I had earlier promised her of doing so. That was the only money I had then as I was kinda broke.


I paid on the 30th of September, 2016, ignoring the fact that my mother was about to be thrown out of her rented apartment in Kaduna, she even called me that same day on my way to the bank reminding me of what I promised and I lied to her that I had no money (I regret doing so now). I paid hoping to get 2 to 5 million in 4 months time, as I know other people that invested in Swiss Golden and made millions in just 2 months. This man assured us of getting people as he has gone to other states and they had paid.


I know of some church members that sold their belongings to invest, I know of a newlywed man who collected loan from him office to pay back with interest, I know of a guy who collected the money from his mothers local savings groups! They are all SAD now and disappointed! We all believed Ovie cos he was standing on the alter and boldly speaking!


Fast forward to December, 2016, they said our (Katsina) money had yielded something and we should come and take part of it, only for them to be sharing 100k each for the first 30 people that paid! Being the outspoken type, I stood up against it, I said that was NOT our agreement. The money was to come in 4 months and we are to earn atleast 5 million from the calculations so why bringing 100k to us after 3 months??? Other “BIG WIGS” in the church shouted at me and asked me to keep shut! (Seriously???) Okay give me the 100K na, they said we have to ‘DROP’ something for the church (hmm) and it must be 50K, so we are going with 50k and I was like, even my capital is not yet out, you want me to start giving you something? Like this is BUSINESS!!!! Last, last, I sha dropped 30K leaving there with just 70K. With others dropping all for the church! But before I left I asked a vital question, How much are we now expecting, and when??? I was again shoved aside!!!

January, February, March, April, 2017 passed we didn’t hear anything from them, the other people who didn’t get anything out of that first 100k shared were even more worried, I started mailing them(LinkDirect) only for them to mistakenly send me a mail meant for Benin Investors and that was how I found out we were NOT the only ones. Further findings revealed, he (Pastor Ovie) did same thing to Benin, Abuja, Owerri, Nasarawa and even other Churches!!!
I also later found out he didn’t use the money for SWISS GOLDEN ( as we earlier agreed in our Oral contract)
He (Ovie) breached our Oral contract, he collected our monies claiming he wanted to invest in Swiss Golden only for him to FLEX with the money and brag that NOTHING CAN BE DONE!!!
WHAT???

woke up this morning only for me to find out that Mr. Ovie had un-friend all Nigerians on his Friend list here on Facebook and DELETED all his photos. They don’t pick calls anymore, in fact, the number they gave us isn’t connecting, a lady contacted the wife here on
Facebook and she shouted at her, threatened her and blocked HER!!!

How can you hold people’s money for 11 months all in the name of SwissGold?? This is clearly NOT a case of delayed investment but FRAUD and WICKEDNESS!!! You know you weren’t going to use the money for Swiss Gold why lie to us???
I don tire to dey type I go continue later!!

I Know 150K na small money but if you multiply am by the number of people wen dey involve for all the states no be small thing oh!
Now they are silent about it and want it to sleep! SMH!
Posted by Unknown on August 24, 2017