Carrie Fishers estate worth nearly 7 million to be inherited by her daughter Billie Lourd.

Carrie Fisher is passing on an estate worth nearly $7 million to her daughter, Billie Lourd. 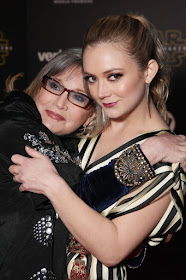 New court documents obtained by PEOPLE and filed by Fisher’s estate executor show that the Scream Queens actress will inherit $6.8 million in personal property left to her by her late mother.

It’s also possible that Fisher, who starred as Princess Leia in the wildly successful Star Wars franchise, has additional funds in trusts that would not necessarily be included in this probate filing.

Some of the Star Wars actress’s assets were outlined in court documents previously obtained by PEOPLE.

Those included several bank accounts, a 2016 Tesla S, full ownership of several LLCs and a life insurance policy. Personal and household belongings like jewelry, artwork, and collectibles will also go to Lourd, Fisher’s only child from her relationship with talent executive Bryan Lourd.

Additionally, the 25-year-old actress will inherit the rights to her mother’s public image and likeness, as well as her intellectual property rights — including ongoing proceeds from Fisher’s books, specials, trademarks, and copyrights.

Some of Fisher’s memorabilia is set to be auctioned in September. Organized by Profiles in History and her brother Todd, the auction will include items like Fisher’s life-size Princess Leia statue in its original phone booth, her personalized director’s chair from Star Wars: Return of the Jedi and even her personal writing desk. Portions of the proceeds will go to Debbie Reynolds’ charity The Thalians and The Jed Foundation, a charity chosen by Lourd.

Fisher’s estate, which she shared with her late mother, Debbie Reynolds, is also on the market for $18 million. The proceeds from the sale will likely be incorporated into the trust.

The actress suffered a heart attack at the end of last year and died at the age of 60. She was flying from London to Los Angeles on Friday, Dec. 23, when she went into cardiac arrest. Paramedics removed her from the flight and rushed her to a nearby hospital, where she was treated for a heart attack. She later died in the hospital, just one day before Reynolds, who was 84.