A Driver Emeka Osuh caught having sex with the wife of his boss at home in Lagos...

A 30-year old private driver, Mr Emeka Osuh has been charged before a Lagos court after he was caught having sex with the wife of his boss in Lagos. The director reportedly sacked his wife but the driver was arraigned for misconduct by obtaining from his wife and stealing his goods worth N900,000. 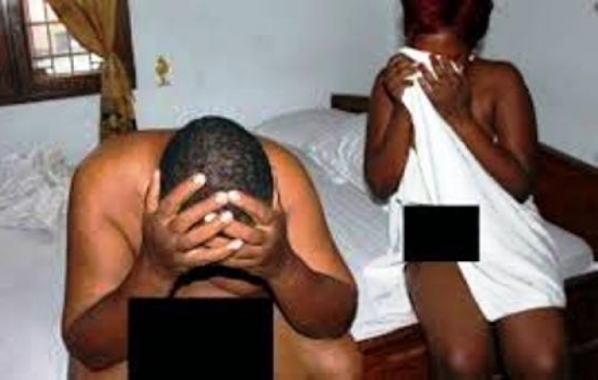 Due to the nature of his business, he was always travelling to ensure the smooth running of his business. However, his constant travelling allegedly affected his wife emotionally. The wife was said to be lonely and she found solace in Osuh who usually came to sleep with her in the house when her husband was not around.

But the escapade came to the open when the husband who had suspected their moves deliberately came back early in the morning, entered their bedroom but did not find his wife. He then went to the guest house where the driver usually slept and met his wife and driver there in bed.

Both the wife and the driver pleaded with him and asked for forgiveness. The director told them that he had forgiven them but his wife will have to go back to her family while the driver was relieved of his job to enable them to marry.

He reportedly took their only child and sent both of them away. He thereafter was said to have audited his company and discovered that the driver had stolen his products worth N900,000.

The driver was arrested and charged before Ejigbo Magistrates court for misconduct and stealing under the Criminal Code. He pleaded not guilty. The presiding Magistrate, Mrs J.O.E Adeyemi granted him bail in the sum of N50,000 with two sureties in like sum. He was remanded in prison custody pending when he will perfect his bail condition.

coco's note:
Cheating has both Penis and a vagina!
Posted by cocowondersblog.com on August 02, 2017