Woman kidnaps Herself to force hubby to relocate her to the US .

The struggle to relocate to the united states is real.. read below... 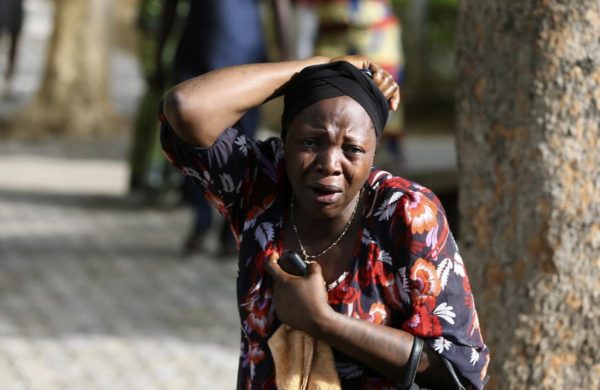 A 37-year-old woman, Bukola Ogun, said she planned her own kidnap in order to scare her husband into relocating her and children to the United States.
The Oyo State Commissioner of Police, Abiodun Odude, said while parading the suspect and others at the state police headquarters in Ibadan on Friday that Ogun conspired with three other persons, including her cousin, to arrange the crime.


He said, “The Special Anti-Robbery Squad of the command arrested a business woman who conspired with a three-man gang to orchestrate her own kidnap in order to fraudulently obtain money from her husband, Kayode Ogun, who lives with her in Ibadan.


“The incident happened on July 4, 2017 at around 7.45pm when three armed hoodlums stormed the residence of the supposed victim and kidnapped her. Barely four hours later, the suspects contacted the husband and demanded a N10m for her release.

“The husband, who did not know that it was all arranged by his wife, contacted the police and a manhunt was launched for the hoodlums. Two male suspects were later arrested.”

The suspects arrested are Kayode Adepoju and Olalekan Anafi. Ogun said that her husband, who has dual citizenship of Nigeria and the US, worked for the stock exchange and that the whole thing started like a joke. She added that she lodged herself in a hotel at Imalefalafia area of Ibadan.

“I just woke up one day and thought of a way to make my husband see the reason why he should use his American citizen status to take me out of the country. It all started like a child’s play. I told my supposed abductors to tell my husband that the ransom was N10m although I knew he would not be able to pay such money. He is just a salary earner. I lodged myself in a hotel and I was there for two days. I went back home on the third day and no ransom was paid.”
href="http://punchng.com/woman-fakes-own-kidnap-to-force-husband-to-relocate-her-to-us/" style="color: #373737; text-decoration: none;">
Punch correspondent gathered that the husband, who resided in the US for many years before returning home a few years ago, had already begun the process of relocating the family to the US but the wife thought the process was too slow. They have been married for six years and blessed with two children.

The cousin, Adepoju, said, “She called me and said she wanted to stage her kidnap. She said she wanted to scare her husband with it so that he would see the reason why it was necessary for him to take her abroad. We did not collect any money from the husband and we did not use any weapon in the operation. I was arrested a day after we kidnapped her.”
Posted by Unknown on July 15, 2017