Woman confesses to killing her husband because she was angry.. 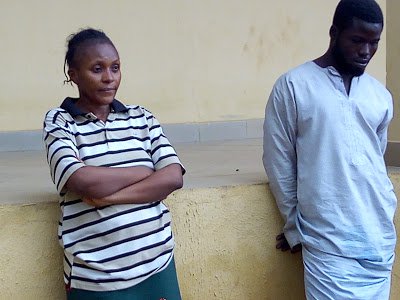 A 39-year-old mother of three identified as Omotayo Salawudeen has confessed to killing her husband in Oshogbo, in Osun state.

Omotayo, who said she was “just angry” with her late husband, 43 years old Salawudeen Hakeem, told journalists that she contracted one 24yrd old ex- convict Oladapo Dolapo to do the job.


The suspect made the confession while, being paraded alongside her accomplice by the Osun state police command, in Oshogbo, on Monday.

According to her, the late husband was a good person who always took care of her needs and that of her children.

She said “We’ve been married for seventeen years, we are blessed with three children aged 17, 15 and 12”

“He didn’t not offend me, I was just mad at him,I choked him with a pillow after having s3x and Dolapo stabbed him to death with a knife.

“I regret my action. I didn’t know it would feel this way”

The accomplice, Oladapo Dolapo also corroborated the confession of the wife.

He said the suspect (wife) contracted him to punish her husband by killing him, with a promise to give him whatever he requested, if the operation is successful.