WASHINGTON — Senator John McCain, the 2008 Republican presidential nominee known for his independent streak over more than three decades representing Arizona in the Senate, has brain cancer, his office disclosed Wednesday night in a statement from the Mayo Clinic. 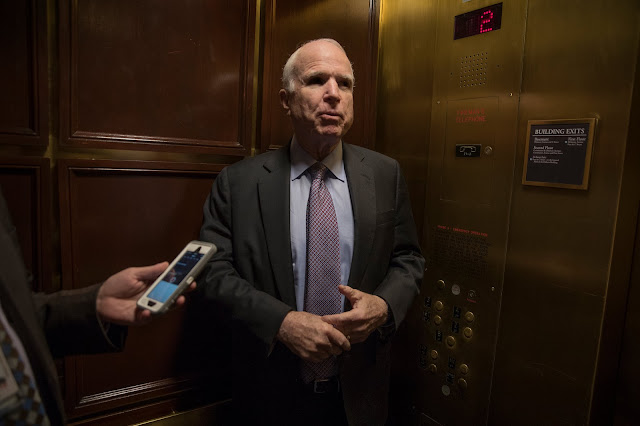 Mr. McCain, 80, has a glioblastoma, one of the most common but also one of the most malignant brain tumors. It can be treated with chemotherapy and radiation, but medical experts said it almost always grows back. Mr. McCain’s office said he was recuperating at his home in Arizona and “appreciates the outpouring of support he has received over the last few days.” His office said Mr. McCain would decide when to return to the Senate as he consults with his medical advisers. 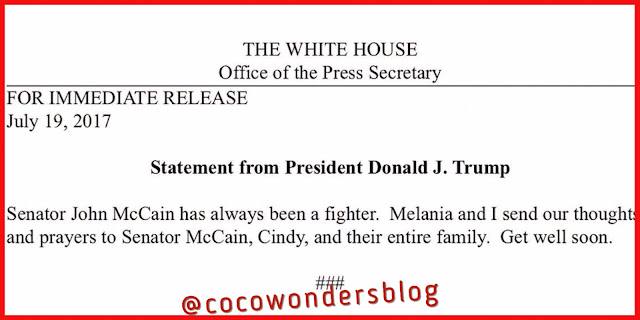 Medical experts said the type of tumor Mr. McCain has is particularly aggressive. The median survival of a glioblastoma is about 16 months, said Eugene S. Flamm, chairman of neurosurgery at Montefiore Hospital in the Bronx. Senator Edward M. Kennedy of Massachusetts died in 2009 from the same kind of aggressive brain tumor. Mr. McCain learned of the tumor after undergoing surgery late last week at the Mayo Clinic Hospital in Phoenix to remove a blood clot above his left eye. Mr. McCain, the son of a prominent family dedicated to military service, has been in American life since the 1960s. He was the public face of the mistreatment of American prisoners at the North Vietnamese camp known as the Hanoi Hilton, where as a Navy pilot he was confined and tortured for over five years. Decades later, he was the happy-go-lucky captain of the Straight Talk Express, the campaign bus where he cultivated his image as a candid political maverick in his failed 2000 presidential run. 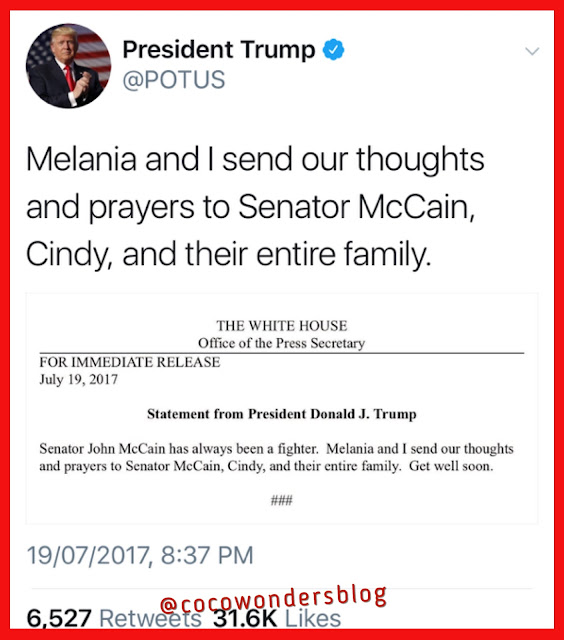 He was elected to a sixth Senate term this past November. Four presidents — Donald J. Trump, Barack Obama, Bill Clinton and the elder George Bush — issued heartfelt statements wishing Mr. McCain a speedy recovery late Wednesday. “Senator John McCain has always been a fighter,” Mr. Trump said. Mr. Obama, who defeated Mr. McCain in the 2008 election, called the senator a “hero & one of the bravest fighters I’ve ever known.” “Cancer doesn’t know what it’s up against,” Mr. Obama tweeted. “Give it hell, John.” The diagnosis shook the Senate, where Mr. McCain is a popular figure despite his occasionally heated disputes with colleagues in both parties. His illness had implications this week for the health care debate, causing Senator Mitch McConnell, Republican of Kentucky and the majority leader, to postpone a floor fight until Mr. McCain returned to Washington. 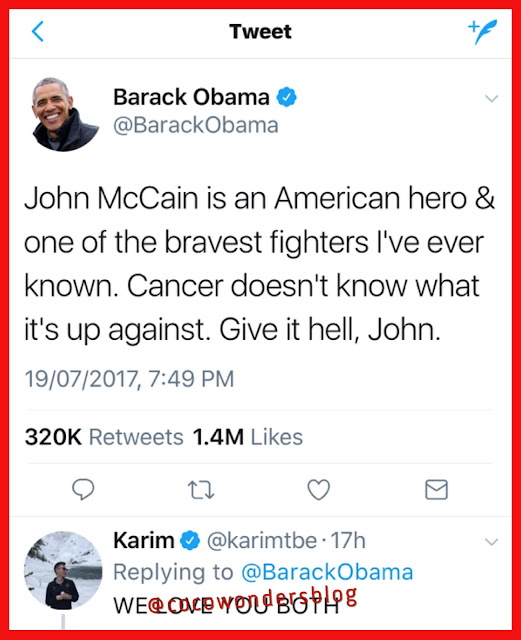 On Wednesday night, about a dozen lawmakers gathered in the Dirksen Senate Office Building to explore a health care compromise asked Senator James Lankford, an Oklahoma Republican who is a Baptist minister, to lead them in prayer for their colleague. Mr. McCain endured grueling rehabilitation from his time in the prison camp but later led the effort to reconcile with Hanoi in a striking gesture of forgiveness. After quickly becoming prominent as a House member in his first election in 1982, Mr. McCain won the Senate seat given up by the Arizona icon Barry Goldwater in 1986. He became a fixture in the Senate, where he denounced the corrosive effects of big money in political campaigns and was a central player in congressional debates on military policy, immigration and health care. 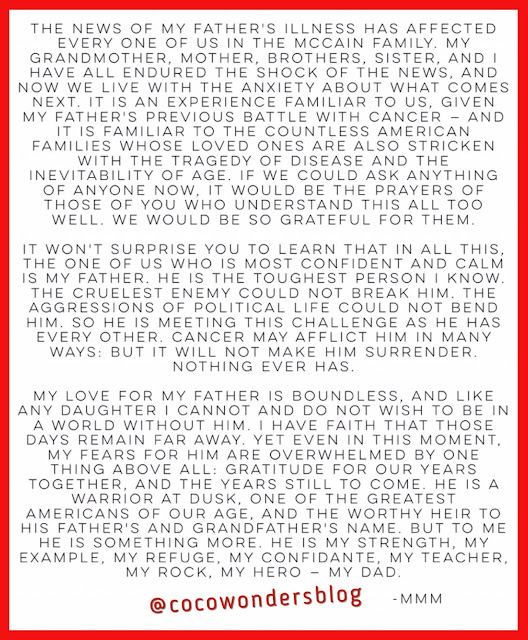 Wednesday’s disclosure suggested that Mr. McCain’s condition was more serious than initially believed, although the statement said that “he is recovering from his surgery ‘amazingly well,’” according to his doctors, “and his underlying health is excellent.” As the Republican health care bill teetered in recent days, Mr. Trump referred affectionately to Mr. McCain as a “crusty voice” in the capital. But their relationship has been fraught. In July 2015, during the presidential campaign, Mr. Trump denigrated Mr. McCain’s military record, saying he was considered a war hero only because he was captured. “I like people who weren’t captured,” Mr. Trump said in a comment that many suggested had gone too far. Mr. McCain, who at the time was facing conservative opposition in his re-election bid, remained a supporter of Mr. Trump throughout the campaign. However, Mr. McCain has pressed for a deep investigation into any interference into the presidential campaign by Russia, which he considers an adversary. On Tuesday, and despite his condition, Mr. McCain issued a statement warning about Russian intrusion in Ukraine and calling for new sanctions against Moscow. Mr. McCain faced an uphill battle in 2008 given public discontentment with the United States-led war in Iraq and overall fatigue with the administration of George W. Bush. Mr. McCain picked Sarah Palin, then the governor of Alaska, as his vice-presidential running mate in an effort to reinvigorate a flagging campaign with a woman on the ticket. A crucial moment in the race occurred in late September 2008 when he suddenly suspended his campaign and returned to Washington for an economic summit meeting at the White House that was also attended by Mr. Obama, then a Democratic senator from Illinois. Mr. McCain’s 11th-hour effort to focus on the economy was generally considered a lost opportunity, and the financial collapse helped propel Mr. Obama to the presidency. Mr. McCain currently leads the Senate Armed Services Committee and is a top proponent of using military force overseas. The Senate is preparing to take up the annual Pentagon policy measure produced by the committee. In Congress, he is probably best known for his efforts to champion changes in campaign finance laws over the fierce objections of some of his Republican colleagues, particularly Mr. McConnell. The standard of care includes surgery to remove as much of the tumor as possible, and then radiation and chemotherapy. In the past, radiation sometimes diminished patients’ brain function, but techniques have improved so that more healthy brain tissue is spared and patients fare better, said Dr. Mitchel S. Berger, a neurosurgeon and glioblastoma expert at the University of California, San Francisco. Jeff Flake, the junior Republican senator from Arizona, acknowledged the seriousness of Mr. McCain’s diagnosis in a still-hopeful Twitter post. “Tough diagnosis, but even edited from the nytimes.
Posted by cocowondersblog.com on July 20, 2017