Jay z - et the baddest girl in the world get away. I don’t even know what else to say. N*gga,

JAY-Z dissed so many people in his new album 4:44, one of them being Eric Benét who was once married to Halle Berry. Describing how he almost lost Beyonce due to his infidelity, JAY-Z compared it to Eric losing Halle Berry, who was once seen as a world class beauty. 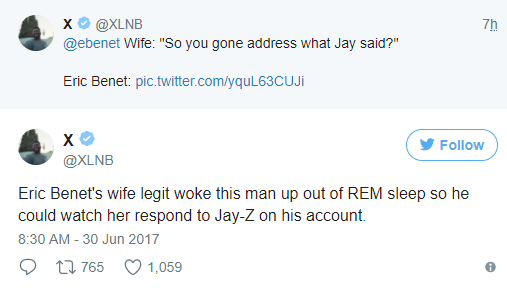 "You almost went Eric Benét. Let the baddest girl in the world get away. I don’t even know what else to say. N*gga, never go Eric Benét," JAY-Z rapped on the song titled "Kill Jay Z".

It seems Eric was alerted to the lyrics of JAY-Z's track because, almost as soon as the album dropped, Eric tweeted at JAY-Z in the early hours of this morning, to address the diss.

His tweet read: "Hey yo #Jayz! Just so ya know, I got the baddest girl in the world as my wife....like right now! "

Twitter users were not buying that Eric really tweeted that and most are saying it was his wife who sent the tweet herself or forced him to tweet it.