Supreme Court judges ruled 6-1 in favor of a man from British Columbia in western Canada convicted for sexual assault and bestiality after he involved the family dog in the abuse of his two stepdaughters. 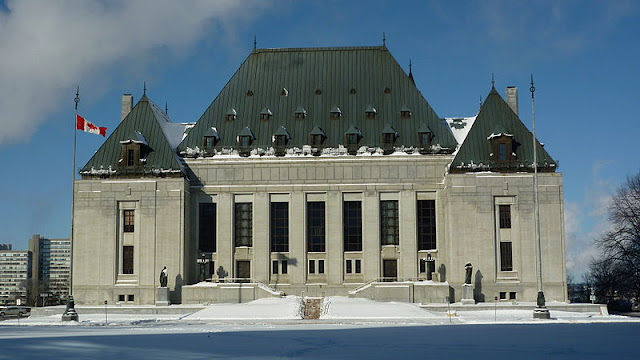 The man, known only by the initials “D.L.W.” to protect his stepdaughters’ identity, successfully appealed his bestiality conviction in a provincial court, arguing that according to the law, the offense of bestiality requires penetration, which his actions did not involve.
Justice Thomas Cromwell, writing for all concurring judges, said in the decision that penetration has always been required to secure bestiality convictions and courts do not have the power to rule otherwise.

The Supreme Court of Canada ruled that the country's current legal definition of bestiality only bans penetrative sexual acts with animals, but it didn't legalize any other similar activities...

This should be fitting as one reads many of the headlines these days. The Independent reported that the case involved a British Columbia man, identified as “DLW,” who was convicted of 13 counts of sexually assaulting his stepdaughters, but was acquitted of bestiality — because he “only” forced dogs into oral sex, without penetration being involved. The man “smeared peanut butter on the genitals of his victims and had the family dog lick it off while he videotaped the act.”

As a result of this story, the case for allowing bestiality came up and instead of doing what is right Canada’s Supreme Court instead legalized having sex between people and animals as long as “no penetration is involved”.
Out of the 8 judges only one had sanity. Justice Rosalie Abella, the lone dissenter in the 7-1 ruling, said that penetration should not be considered essential when defining bestiality.
“Acts with animals that have a sexual purpose are inherently exploitative whether or not penetration occurs,” Abella said.
The west is becoming sicker and sicker. The Canadian legislature process recently made international news after the Liberal Party, led by Prime Minister Justin Trudeau, introduced a new bill seeking to establish two year prison terms for people found guilty of transgender discrimination.
“There remains much to be done, though. Far too many people still face harassment, discrimination, and violence for being who they are. This is unacceptable,” Trudeau said at the time, noting that the bill would expand existing “hate speech” prohibitions to include any public speech or communication that “promotes hatred” on the basis of “gender identity” or “gender expression,” which is aimed at defending transgender people.