Piers Morgan has condemned Ariana Grande for not personally visiting the victims of Monday's terrorist attack in Manchester. 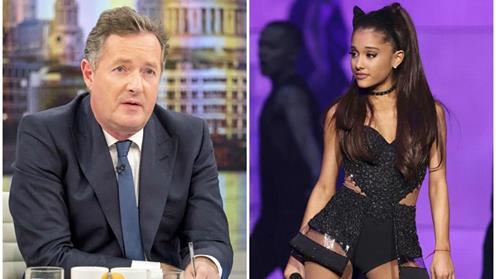 Responding to the news that the Queen had visited Manchester Children's Hospital to speak with people wounded in the incident, Morgan tweeted: "If the Queen can visit the victims in hospital, so can the star they paid to see." He added, "I expected her to stay, visit & comfort her wounded fans & relatives of those who died".
At least 59 people were injured and 22 killed in Monday's attack, after a suicide bomber detonated an explosive at the MEN Arena, at the end of Grande's concert. The 23-year-old singer, who has since described herself as feeling "broken" and "so so sorry", flew home to the United States after the attack, cancelling her remaining tour dates.

When one fan leapt to her defence, saying Grande was "probably traumatised herself", Morgan replied: "Probably not as much as those killed & wounded".

The Good Morning Britain host dismissed comments from those concerned about the young singer's age, writing "23 is not a child".
He also claimed: "I can 100% guarantee you I would stay & visit those who had been killed or wounded watching me perform".